Ricky Martin, the tireless international superstar who detonated the Latin Pop Explosion, is back with Sound Loaded, the eagerly-awaited follow-up to his phenomenal English language debut album, which has sold 15 million copies worldwide and has been certified seven times RIAA-platinum in the United States since its release in 1999. With Sound Loaded, Ricky charts further his path of artistic growth, continuing to find new ways of blending el ritmo with elements of Pop, Rock, and Funk. Ricky's worldwide fanbase, which has grown exponentially with each of his releases, will not be disappointed with Sound Loaded. While remaining true to his Latin music roots, Ricky extends the possibilities of his music with 15 brand-new tracks ranging from heart-stopping ballads to booty-stomping party anthems.

Sound Loaded kicks off with Ricky's latest hit single, "She Bangs," a frenetic hook-packed tribute to a wild woman who bumps la vida loca up a couple of notches. (The album also includes a Spanish language version of the song.) The album's remaining songs--"Saint Tropeze," "Come To Me," "Loaded," "Nobody Wants To Be Lonely," "Amor," "Jezabel," "The Touch," "One Night Man," "Are You In It For Love," "Ven A Mí (Come To Me)," "If You Ever Saw Her," "Dame Más (Loaded)" and "Cambia La Piel"--provide a musical portrait of Ricky Martin now as well as the soundtrack to a nonstop Latin Pop Dance Music Party (with candlelit couches in the corners for interludes of amor.)

Born in Puerto Rico, Ricky Martin first came to the attention of American audiences for acting stints including the role of Marius in "Les Misérables" on Broadway.

For more than a decade, Ricky Martin watched his popularity escalate around the world, even as he remained under the radar of stateside audiences. And then…

More than a billion television viewers in 187 countries across the globe felt the full force of Rickymania when he performed "The Cup Of Life" at the 41st Annual Grammy Awards ceremonies in February 1999. Ricky's single, "La Copa de la Vida," was the official song of the World Cup France '98 and has been a #1 single in more than 30 countries. That same night, Ricky's full-length Latin recording Vuelve won the Grammy for Best Latin Pop Performance.

In April 1999, when the true first week's sales (280,000) were tallied on Ricky's "Livin' La Vida Loca," the blockbuster single shot to #1 on the Billboard Hot 100 and became the single with the highest #1 sales figures in Columbia Records history and the highest single week's sales figures in 1999. Ricky Martin became the first solo Latin male artist of the SoundScan era to hit #1 on the Hot 100 and the first male artist to have the #1 single on the Hot 100 in more than a year. "Livin' La Vida Loca" had the highest single week's sales figures of any single released in 1999. "Livin' La Vida Loca" became the #1 single in five international markets including the United States, the United Kingdom, Canada, New Zealand, and Ireland.

Ricky Martin has kept extremely busy since the release of English language debut. As his "Livin' La Vida Loca" became the party anthem of the new millennium (winning two MTV Video Music Awards--Best Dance Video & Best Pop Video--in the process), Martin embarked on one of the best-selling tours in modern concert history, selling out more than 250 concerts in some 25 countries.

When dates for Ricky Martin's anxiously-awaited American tour were announced, each of the venues sold-out within an hour (in some cases, within minutes!) of going on sale. Due to an unprecedented demand for tickets, 11 new dates were added to Ricky's SRO tour itinerary. By tour's end, Ricky Martin had performed to more than 500,000 people across the country and sold some $22.6 million dollars worth of tickets. A Ricky Martin performance at London's Hyde Park drew more than 100,000 fans.

Picked by People magazine has one of the World's 50 Most Beautiful People, Ricky Martin has been the subject of major pieces in Time, Vanity Fair, Entertainment Weekly, Rolling Stone, People, Interview, TV Guide, and many others. Ricky has been named "Entertainer Of The Year" by Entertainment Weekly and is one of People's 25 Most Intriguing People Of '99. Ricky Martin was one of the subjects on the annual "Barbara Walters Oscar Special."

Throughout his career, Ricky Martin has remained true to his Puerto Rican roots and the Hispanic/Latino fanbase that first made him a star. A peerless musical ambassador (who's also fluent in five languages!), Ricky has introduced Latin Pop music to markets around the world including the United States, England, Japan, China, Germany, and many others. He continues to perform and record in Spanish and often visits his native Puerto Rico. At his appearance at the first annual Latin Grammy Awards, Ricky acknowledged the enormous cultural and musical contributions of the legendary Tito Puente, the master of mambo who passed away this year.

Ricky Martin is an active participant in many social causes including the Pediatric AIDS Foundation, the Luciano Pavarotti & Friends fundraising concerts, the Carousel of Hope, the Rainforest Foundation, and others.

To date, Ricky Martin has sold more than 32 million albums (more than 24 million) and singles (more than 8 million) worldwide. His 2000 World Tour has taken him to Canada, Japan, Asia, Australia, Europe, and back to the States. 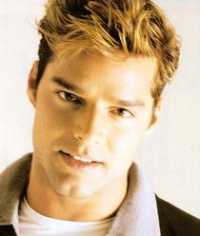