Richard Thompson, a founding member of the British folk-rock group Fairport Convention [see entry], left that band in 1971 for a career that in many ways fulfilled Fairport's goal: to link Celtic folk music to rock. Thompson's gallows-humored, fatalistic songs, whose outlook owes something to his Sufi-Muslim religion, are steeped in the jigs and reels and marches of British folk music, although they are often played on electric instruments.

After leaving Fairport, Thompson first sat in as a guitarist on British folk-rock albums like Mike and Lal Waterson's Bright Phoebus. He joined a loose aggregation of Fairport and folk-scene veterans, including drummer Dave Mattacks, singer Sandy Denny, and bassist Ashley Hutchings under the name the Bunch to record an album of pop oldies, Rock On. On that album, a friend of Sandy Denny's named Linda Peters (née Pettifer) sang "The Loco-Motion," and she married Thompson soon afterward. Thompson also sat in on Hutchings' first solo project, Morris On.

In 1972 Thompson began his solo career with the brilliant, eccentric Henry the Human Fly, which juxtaposed Chuck Berry riffs with old-English concertinas on Thompson's original songs. Linda Peters Thompson sang a few backup vocals, but she didn't get full billing until I Want to See the Bright Lights Tonight, which was belatedly released in the U.S. as half of the double album Almost Live (More or Less). Although Richard Thompson wrote all the duo's material (except for a song on their final album cowritten by Linda), he shared lead vocals with her on the albums they made together, and Linda's emotive mezzo-soprano was widely praised. In 1974 the Thompsons put together an electric band called Sour Grapes, with ex-Fairport guitarist Simon Nicol and a rhythm section, but after a tour opening for Traffic the group broke up. In 1974 the Thompsons converted to Sufism. The pair toured Britain in 1975 with a band that included ex-Fairports Dave Pegg on bass and Dave Mattacks on drums, plus button accordionist John Kirkpatrick. Afterward they retreated to the English countryside to start a Sufi community. They returned in 1978 with First Light, which used a U.S. rhythm section. Strict Tempo! was an album of instrumentals on which Thompson played all the instruments except percussion (by Mattacks); it included traditional jigs, reels, polkas, and a Duke Ellington tune. He also sat in on the first solo album by David Thomas of Pere Ubu.

Sessions for Shoot Out the Lights were originally produced by Gerry Rafferty (Stealer's Wheel, "Baker Street"); unhappy with the results, Thompson shelved the project. Producer Joe Boyd offered to produce the album for his new label, Hannibal. Thompson toured the U.S. as an acoustic solo act before Shoot Out the Lights was released, where he met his future wife, concert promoter Nancy Covey. Returning to England, he asked Linda for a divorce. They toured together with a band including Nicol, Mattacks, and bassist Pete Zorn. But the tensions of a disintegrating marriage spilled over to the music, and the pair split acrimoniously. While Linda sought a solo contract, Richard recorded an album of country-and-Celtic-tinged breakup songs, Hand of Kindness (#186, 1983). Linda signed with Warner Bros. in 1984, and released an album of edgy, countryish songs [see entry]. It was issued concurrently with Richard's Across a Crowded Room (#102, 1985), his first major-release in seven years.

Thompson recorded at a steady pace throughout the next decade, but his career became a succès d'estime, earning critical raves and low sales. In 1993 Rykodisc released Watching the Dark, a three-CD retrospective covering Thompson's career. He's played on albums by artists ranging from Suzanne Vega to Robert Plant. Jo-El Sonnier had a Top 10 C&W hit covering Thompson's "Tear Stained Letter." A tribute album, Beat the Retreat, featuring Bonnie Raitt, Los Lobos, R.E.M., Dinosaur Jr, and David Byrne, among other artists, covering Thompson's songs, was released in 1994. The same year Thompson released Mirror Blue and joined fellow musicians John French, Fred Frith, and Henry Kaiser to release Invisible Means, a sequel of sorts to a quirky 1986 summit of eccentricity, Live, Love, Larf & Loaf (which was subsequently reissued in 1996). In 1996 Thompson released You? Me? Us?, a Grammy-nominated two-CD set split between electric and acoustic versions of similar material. He then collaborated with bassist Danny Thompson on the 1997 Industry, a half-instrumental concept album about the rise and fall of the British industrial complex. The 1999 album Mock Tudor, a reflection on Thompson's youth growing up in suburban London, featured his son Teddy Thompson on vocals and guitar. The Thompsons toured together to promote the record, with Teddy joining his father on duets of classic Richard and Linda Thompson songs. 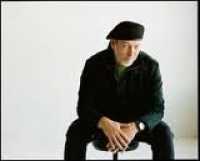