The exciting, fantastic trip through an imaginary orld full of secrets now enters its third phase: With "Dawn Of Victory", the Italian, epic, symphonic metallers, Rhapsody continue their successful journey, which began with their two previous albums, "Legendary Tales" and "Symphony Of Enchanted Lands". "Dawn Of Victory" is sure to catapult the band once and for all into the upper echelons of the metal fraternity, joining names such as Dream Theater, Savatage and Gamma Ray. The album cleverly combines typical elements of the trademark Rhapsody sound with new and exciting influences. Inspired by the hugely positive reactions of the fans and press alike, as well as the experience from their recent European tour with Stratovarius, Fabio Lione (vocals), Luca Turilli (guitar), Alex Staropoli (keyboards), Alessandro Lotta (bass) and new boy Alex Holzwarth (drums) went about the new album with a stronger determination, showing much more of an aggressive attitude than before. Keyboard player Alex Staropoli describes the band's latest opus, "Whilst Legendary Tales and particularly Symphony Of Enchanted Lands were relatively orchestral, the new songs are more direct, with a tougher guitar sound and a very aggressive basic attitude". He goes on to say, "I think that Luca's guitar arrangements were especially influenced by the tour. We used an additional rhythm guitarist for the live shows so the guitar sound was particularly heavy. We loved it and the fans loved it so during the album's production we paid more attention to the overall sound of the guitar arrangements than we had done previously. But we didn't neglect the cinematic side of our music. We are still huge fans of Hollywood film scores, such as those by Danny Elfman and Jerry Goldsmith. You can hear that we have a weakness for them, throughout the album."

The best example of this is the song "Holy Thunderforce", which has already been released as a single. A driving, hymn-like track that is full of heavy rhythms and epic solos. Elements of which can also be seen in the title track. A rousing fanfare peppered with classical overtones throughout the choruses, shows the band at their best. Singer Fabio Lione once again makes his mark on "Dawn Of Victory", whilst Luca demonstrates his prowess with another great guitar solo. Other highlights from the album include the epic "The Mighty Ride Of The Firelord", the unique instrumental, "Trolls In The Dark", and "The Village Of Dwarves", which recalls the atmosphere of the Middle Ages and is sure to transport the listener to that time.

"Dawn Of Victory" was produced at both 'Gate-Studios' and 'Pathway Studios' in Wolfsburg, Germany by Sascha Paeth and Miro. The combination of Rhapsody, Paeth and Miro has, over the past three years, become a melting pot of brilliant ideas and the perfect team to transform the band's concepts onto disc. Paeth is known to many as the guitarist of metal band, Heavens Gate while his partner, Miro has gained an excellent reputation as producer and engineer for bands such as Gamma Ray, Angra and Kamelot. The album is further augmented by the inclusion of the Helmstedter Chamber Choir, an original flautist and violinist and the inimitable narration of Sir Jay Lansford.

The amazing cover art comes this time from artist Marc Klinnert (Axel Rudi Pell etc.) and proves to be even more impressive than its predecessor. Also following on in the wake of its predecessor will be the impressive choice of formats available. Not only will the album come as a 12" picture disc (accompanied by a full size colour poster) but also as a limited double CD, complete with a lavish 64 page hard back book. The extra disc comprising several alternate version of songs from the album as well as an enhanced portion featuring video clips.

With "Dawn Of Victory", Rhapsody is closely following on in the trailblazing path of their first two albums, both stylistically and thematically. Their 1997 debut album, "Legendary Tales" caused an international sensation in the metal community. Its follow up, "Symphony Of Enchanted Lands" went even further catapulting the band into the charts in several territories including Germany where it entered at #54. Aside from having achieved sales so far in excess of 250,000 albums, the band are still trying to develop their sound further by incorporating new ideas whilst still remaining true to their primary influences associated with the music of the cinema. Wherever the new album takes them, it's certain that this legendary tale is far from over! 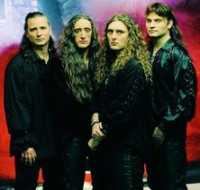