Trying to put a universal spin on very personal feelings and beliefs is at the core of great songwriting. Relient K is a potent young band that has captured those elusive elements on its brilliant Gotee Records debut. The four members hail from Canton, Ohio ("the home of the Pro Football Hall of Fame!" Thiessen is quick to add).

"Until a few years ago," says Matt Hoopes, "[we] didn't really have any musical aspirations. We wanted to learn guitar to be in the youth worship band. We were all really into punk growing up, and we still are. When we started out, we wanted to have pop punk songs, but without the speedy and somewhat monotonous beat that is sometimes associated with punk music. Most importantly, we wanted to make sure we had strong melodies and harmonies. We just tried to write the most annoying songs we could with melodies that you just can't keep from getting stuck in your head!"

Thiessen feels the music of Relient K is unlike anything else in Christian music, and he is fired up about getting the band's music out to more people. "We want to be humble, and present the Gospel gently-to act as employees of the church. We feel, that way, we're living the Gospel."

The music of Relient K evokes the brashness of British Invasion bands, such as The Who, while mixing in a post-punk/pop twist. "We like to sing in tune, so that ruled out being a straight punk band," Hoopes cracks. Thiessen and Hoopes say bands such as MxPx, Slick Shoes, and Ghoti Hook have influenced Relient K. Thiessen also finds comparisons to artists such as Blink 182 and Foo Fighters very flattering.

Produced by Mark Townsend (dc Talk, Zilch), the disk is chock full of shimmering guitar and vocal hooks, spot-on harmonies, crisp power chords and lyrics that bask in pop culture references while always delivering a spiritual payoff. "I get tired of reading lyrics and not understanding what people are talking about," says Thiessen. "I know the kids that are going to be listening to our music. I wanted to write so that they could understand exactly where I'm coming from and where the song is going."

Among the media icons that get a name check on Relient K are Seventeen Magazine, "Wendy's", Michael J. Fox (and his alter ego, Marty McFly), the TV show "Charles in Charge", and "Nancy Drew & the Hardy Boys." Also mentioned is Marilyn Manson, who figures into the song "My Girlfriend", which relates to the premise of 1Peter 5:8, "Your enemy prowls around like a roaring lion, looking for someone to devour." "That song," explains Thiessen, "is about a girl I knew that I thought had rededicated her life to Christ. Instead, she became wrapped up in this 'gothic' persona. It broke my heart that she had changed so much and I sat down and wrote this song about her."

For the past two years, Relient K has been a regular feature at churches, coffeehouses, schools, and clubs. Says Hoopes, "We'll play any place people will let us! We just like to play-end of sentence." The band will continue to tour heavily in support of their debut album.

"Before and after our shows, we spend a lot of time hanging out with kids one-on-one, showing them that we're real people," Hoopes explains. "Being in our situation feels somewhat strange to us. It's a little like being a good athlete in high school. One day you're playing basketball and being cheered on by your classmates, and the next day, you're just you, sitting in the back of history class. I think we see ourselves as that kid sitting in the back of the class, even when we're on stage. I don't think of it as, 'Hey, look at us, we're entertaining you.' It's more like, 'Come on, let's all have fun.' We define being evangelists as not only telling people about the Gospel, but living that as well."

"We realize that God has completely put all this before us and we've been personally called," concludes Thiessen. "We just want everyone to know the love and forgiveness that we have received from our God, and that they can be made pure through Jesus' death on the cross. We also want to show kids that Christians can have a lot of fun, not in spite of their beliefs, but because of the joy of the Lord!" 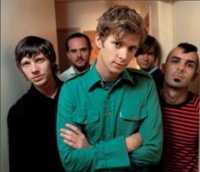