After a chance meeting in a bus in early 1994 between Ben Ely and Quan Yeomans Regurgitator was formed with drummer Martin Lee. Before Regurgitator, Ben Ely was (& still is) in a popular underground local Brisbane band, Pangaea. Martin and Quan were also in local bands previously, Emporium and Zooerastia respectively.

Later on, Paul Curtis (Pangaea's manager) sent a demo tape of Pangaea into Warner Music, with Regurgitator on the b-side. Surprisingly, Warner was interested in Regurgitator rather than the main group, and were immediately signed with a quick release of the EP Regurgitator (self titled). Triple J discovered Couldn't Do It and Regurgitator were launched into the public spotlight.

A few months later in March 1995 the band released the follow-up EP New. Once again Triple J pushed the hits Blubber Boy and Track One. After a short while Regurgitator was touring Australia; pubs, clubs as well as major festivals Homebake & The Big Day Out.

Ben, Quan & Martin travelled to Bangkok (Thailand) in 1996 to record Tu-Plang, Regurgitator's first album. This album was recorded in a Thai pop star's recording studio; a useless bit of interesting trivia! The Singles F.S.O., Kong Foo Sing, Miffy's Simplicity and the tongue-in-mouth I Sucked A Lot Of Cock To Get Where I Am were lifted. Later on that year, Tu-Plang won Best Debut Album and Best Alternative Release at the ARIA Awards. Tu-Plang was also followed up by a song clip & live video called Regurgitated.

After constant touring, in particular with the Red Hot Chilli Peppers, Regurgitator recorded UNIT in three weeks during 1997. At this point Shane Rudkin joined the group playing the keyboard. The recording was done in a Queensland house, simply because they wanted to stay at home. The short 35 minute album was a change from the style of Tu-Plang, moving over to an 80's pop type thing. UNIT was extremely successful, making it double platinum (over 140 000 copies sold) by 1999 and 5 prizes at the ARIA Awards. The album even warranted a re-release, UNIT Rebooted. Many of the songs were popular with radio stations (JJJ of course) even breaking into the commercial mainstream with some tracks. The singles lifted off UNIT were Everyday Formula, Black Bugs, Polyester Girl, Modern Life and ! (the song formerly known as).

Following the Burst of Happiness tour and a new single Happiness (Rotting My Brain) in July 1999, the band released a new album titled '...art' on August 23. As opposed to having very little material from which to choose from, this time Regurgitator actually had songs to leave off the album. This release is once again a change in style for the group, this time perhaps implementing a broad range of genres; britpop-esque clean tunes, 60s-style melodies, fast guitar songs and even electronica/dance numbers.

Following this release the group ventured on their ...art tour over September and October 1999, followed by various festival appearances over the summer period. Shortly after the second single from ..art being released, I Wanna Be A Nudist, the long-suffering Martin Lee left the band in a somewhat disgruntled fashion. Apparently he was displeased with the direction of the band's music, and particularly in regard to the fact he was no longer adding to it. This was followed by the announcement that Peter Kostic (Front End Loader, Hairy Mary) has replaced Martin Lee as Regurgitator's new drummer. He appeared with the group on the ABC Sports Awards for the first time... 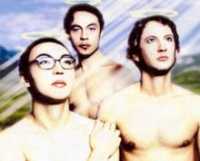