The four members of Helsinki's melodically rocking the Rasmus formed the band in 1995 while still in high school because Finland's English music scene -- in their own words -- "sucked." Their debut, Peep, rapidly went gold in their homeland, making the members rock stars at the age of 16. They quickly recorded and released the follow-up, Playboys, which also went gold and earned the group an Emma, Finland's version of a Grammy. Their third album, Hell of a Tester, included "Liquid," a track that was voted Best Single of the Year by Finland's music critics. 2001's Into went double platinum in its native country, with its debut single, "F-F-F-Falling," going to the top of the charts. An international audience started to build, and the band toured throughout Europe. It paid off when 2003's Dead Letters climbed to number one in Germany, Austria, and Switzerland. David Jeffries, Rovi 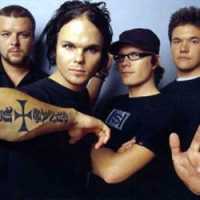