Radiohead is widely regarded as one of the world's most important bands of today. While their debut was rather modest, they were shot to stardom after the success of "OK Computer" - a success that few probably would have expected or predicted when the five of them started playing together in the early 80s after meeting at Abingdon School in Oxford.
Thom Yorke was the driving force of the band. He was singing in the punk band TNT, but asked the TNT bass player, Colin Greenwood, if he wanted to join him and guitar player Ed O'Brien in a new band. One year older Phil Selway started playing drums in the band. Colin's younger brother Jonny hung around them, bugging them, asking to join. Eventually, he was allowed to play with them, first on the harmonica, then, on the keyboards. Finally, he became the lead guitarist.

The band was named "On A Friday" because they rehearsed on Fridays. They made their debut at the Jericho's Tavern in 1987. April 1991, they recorded their first demo tape. The demo gave them the opportunity to record another tape, and the Manic Hedgehog Demo got the ball rolling for the band. Parlophone A&R representative Keith Wozencroft heard it, and after seeing the band live at Jericho's, "On A Friday" signed for EMI. They also changed their name to Radiohead after Talking Head's song "Radio Head" from the True Stories album.

In May 1992, the band released Drill EP which would eventually be a very sought after collector's item. When it was released, however, it reached #101 only and the band toured as a support band. Then, they released Creep EP in September 1992. Still, the big break didn't come before 1993 when Creep entered the Billboard Modern Rock Track Chart, peaking at second place. A re-issue of the single gave Radiohead the break they needed in the UK. Still, the album Pablo Honey never took off, and the fuss around the band faded in spite of them releasing My Iron Lung EP which got fairly good reviews.

Radiohead's second album, The Bends, was released in March 1995. This album got a better reception than Pablo Honey, and the band got a slowly growing horde of loyal fans. However, they had to release five singles from the album before they got a top 10 hit with the beautiful Street Spirit [Fade Out].

One month after the release of the six-minute-long single Paranoid Android, Radiohead released OK Computer in June 1997. The album skyrocketed to the top of the charts and spent 71 consecutive weeks on the UK Chart, harvesting amazing reviews. MTV played the Paranoid Android single regularly, and Radiohead became superstars, winning several awards. OK Computer sold to platinum, and it has gained reputation as one of the 90s most significant albums.

Then, things went quiet around Radiohead. They released Airbag/How Am I Driving? EP and Meeting People Is Easy, a weird little movie about the band made by Grant Gee, who also directed the No Surprises video. However, the band ran into some problems making the follow-up album to OK Computer. The recording sessions were long and in many ways, the band members had to re-define their roles in the band.

Radiohead's music was also kind of re-defined when their fourth album, Kid A, was released in October 2000. The album went straight to number one in spite of the fact that no ordinary promotion scheme was used, and no singles were released from the album. Kid A was totally different from OK Computer. Radiohead had found inspiration from a lot of other sources, turning their heads to more experimental music. Still, Kid A was a success.

June 2001, eight months after Kid A, Radiohead released the second part of their long recording session. The album Amnesiac contained tracks that were made at the same time as Kid A, and while the album held songs with guitar riffs, the Kid A experimental sound was also present at Amnesiac. On tour, Radiohead premiered a few new songs that showed a tendency towards going back to the good old guitar-based style. However, where Radiohead will go from now on is hard to tell. But a whole lot of loyal fans are waiting for their next move. 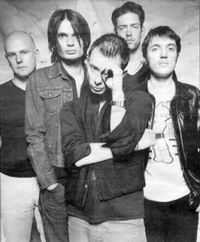