After touring to promote the EP with Liz Phair, Gomez, Sondre Lerche, and Damien Rice, the focus became the full length. John Alagia fortunately came into my life at the very last moment to choose a producer. Something about our chemistry and common favorites like Rufus Wainwright’s ‘Poses’, Carole King’s ‘Tapestry’, Joni Mitchell, Elton John etc. as well as our love of travel and the ocean led us to begin work in August of 2003 at Compass Point Studios in the Bahamas. We treated each song as its own entity and used the players best fitting the song – we had a plethora of amazing musicians including Kevin Salem (who also produced ‘Paper Doll’), Aaron Comess (Spin Doctors), John Conte (Alana Davis, Peter Wolf), Matt Walker (Smashing Pumpkins, Garbage), Matt Johnson (Jeff Buckley, Rufus Wainwright), Stuart Myers and Brian Jones (Agents of Good Roots), Oliver Kraus (cellist – Beth Orton, Ed Harcourt, Tom Mcrae), James Johnston (Bumpus), Robert Carlilse (tenured French horn with the NYC ballet and my uncle), and even the Klezmatics.

John and I were literally and figuratively explorers through this record. He gave me the freedom to experiment with arrangements in my head while stepping in to guide me when my tangents became too far-reaching. Together we made a record that forged new territories for both of us. It is eclectic, lush, bare, honest and full….

I try my best to write of love and pain and explore how we humans treat each other, and what our souls are trying to get out at the same time. Performing is my meditation; writing my traveling companion. These songs are as truthful and in the moment as I could be at this point in my life. They are observational, touching, but with a sense of hopefulness that every piece, and each bit of pain had a reason. So that nothing is wasted. The never can be happenstance. 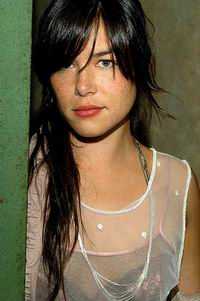