Queer Eye is an American reality television series that premiered on the Bravo cable television network in July 2003. The program's name was changed from Queer Eye for the Straight Guy after the third season to broaden the scope of its content. The series was created by openly gay executive producers David Collins and Michael Williams along with their straight producing partner David Metzler; it was produced by their production company, Scout Productions.

The show is premised on and plays with the stereotypes that gay men are superior in matters of fashion, style, personal grooming, interior design and culture. In each episode, the team of five gay men known collectively as the "Fab Five" perform a makeover (in the parlance of the show, a "make-better") on a person, usually a straight man, revamping his wardrobe, redecorating his home and offering advice on grooming, lifestyle and food.

Queer Eye for the Straight Guy debuted in 2003, and quickly became both a surprise hit and one of the most talked-about television programs of 2003. The success of the show led to merchandising, franchising of the concept internationally, and a woman-oriented spin-off, Queer Eye for the Straight Girl. Queer Eye won an Emmy Award for Outstanding Reality Program in 2004. The show's name was shortened to Queer Eye at the beginning of its third season to reflect the show's change in direction from making over only straight men to including women and gay men. Queer Eye ended production in June 2006 and the final ten episodes aired in October 2007. The series ended October 30. In September 2008, the Fine Living Network briefly aired Queer Eye in syndication.

The majority of Queer Eye episodes follow the same basic format. The episode opens with the Fab Five in an SUV (usually in New York City, where the series was based) discussing their straight subject. The Five review details of the subject's personal life and note problems in their various areas of expertise. The Five usually have a specific event for which they plan to prepare the subject. These included everything from throwing a backyard barbecue for friends to preparing to ask for a salary raise to proposing marriage.

Upon arriving at the subject's home, the Fab Five go through his belongings, keeping up a running commentary of catty remarks about the state of his wardrobe, home decor, cleanliness and grooming. They also speak with the subject and family members to get an idea of the sort of style they like and their goals for the experience and to discuss the planned event.

Queer Eye for the Straight Guy debuted on July 15, 2003 and the series quickly attained high ratings, peaking in September of that year with 3.34 million viewers per episode. The popularity of the show established the Fab Five as media celebrities, with high-profile appearances at the Emmys and a "make-better" of Jay Leno and his Tonight Show set in August of that year. Fab Five members parlayed their celebrity into endorsement deals, notably Thom Filicia's becoming the spokesperson for Pier 1 Imports.

The soundtrack for Queer Eye for the Straight Guy was released February 10, 2004, in the US. It reached number one on the electronic music chart, number two on the soundtrack charts and the top 40 in the Billboard 200 album chart.

The song "Superstar" by Jamelia from the soundtrack also went to number one on the Australian singles charts in the same week, and the theme song of the show, "All Things (Just Keep Getting Better)" by Widelife, went to the top 20 that same month. "All Things" would score a 2005 Juno Award for "Dance Recording of the Year" for producer Rob Eric, who also executive produced the album. 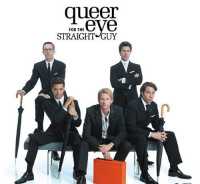