Queensberry is an all-female German pop group, founded in late-2008. Formed during the seventh season of the German version of the international television talent show Popstars, Popstars - Just 4 Girls, the original line-up consisted of singers Leonore Bartsch (Leo), Gabriella De Almeida Rinne (Gabby), Antonella Trapani (Anto), and Victoria Ulbrich (Vici). On 7 July 2010, it was announced that both Antonella and Victoria had left the group, to be replaced by new members, Selina Herrero and Ronja Hilbig.

The band's debut album Volume I was released in December 2008 and reached gold status in Germany. It produced the two singles No Smoke and I Can't Stop Feeling, both becoming top thirty successes in the charts. In February 2008, Queensberry served as the opening act for the Pussycat Doll's World Domination Tour in selected European countries. In November 2009, the second studio album On My Own was released.

For the soundtrack of the film Alvin and the Chipmunks: The Squeakquel, Queensberry recorded The Song with The Chipettes in December 2009, which reached number 6 in the U.S. Billboard charts, with the film soundtrack reaching number 1 in the U.S. soundtrack charts.

On 7 July 2010, the group announced on its website that Anto and Vici had both departed from the group. Selina Herrero, a German-Spanish singer from Bad Kreuznach in Germany, who first hit the German single charts in 2008 with Don’t Be Shy and You Can’t Stop Me, and Ronja Hilbig, a singer from Hamburg, who had played the role of Nala in the German version of the musical The Lion King and had been a member of Die Lollipops, were brought in as new members.

The first appearance of the new quartet was scheduled for 15 July 2010 on VIVA Live. The group made plans to shoot a reality show called A Day in the Life of Queensberry to be shown all over the USA. In October 2010, the group recorded its earlier single I Can't Stop Feeling in Spanish as Yo No Puedo Vivir Sin Ti. The song, written by Teemu Brunila and Kid Crazy, and adapted for Spanish by José Valdes, was first performed on VIVA Live.

On 3 December 2010, Queensberry announced it would make a label change and release an album in 2011. During spring and summer of 2011, the group performed throughout Germany on their Pink Chocolate Tour. 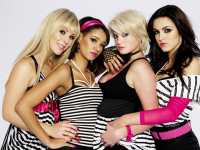