Q-Feel was a British synthpop group. They released their self-titled album in 1983, which included their only hit single, "Dancing in Heaven (Orbital Be-Bop)". Group member Martin Page went on to achieve success as a songwriter and solo artist.

"Dancing in Heaven (Orbital Be-Bop)" was an entry in the 1982 A Song For Europe, the UK's pre-selection for the Eurovision Song Contest. It finished sixth (out of eight) behind eventual winners, Bardo.

The song was also featured in the 1985 dance film, Girls Just Want to Have Fun, and the opening sequence of the 2007 retro comedy, Kickin' It Old Skool. 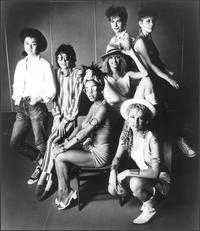