Q And Not U

"Q and no thank U," huffed a hipster-ed out casual acquaintance of mine as the buzzed-about D.C. outfit took the Black Cat stage and began tearing into their set sometime in the Winter of '99. "Jesus," I thought to myself, "this brand new band is ALREADY inspiring an indie-snob backlash? They MUST be doing something right." By the end of their set, it had all been clearly stated: Q and Not U weren't doing something right, they were doing EVERYTHING right. I converted that night, and have been a follower ever since. And that casual acquaintance with the abundance of 'tude? The last time I ran into him, a few years down the road, was at another Q and Not U gig. "Oh, you like these guys, too?," he asked. I just smiled and nodded.

The Onion, that meta-bible of satire and all things deadly-accurate, recently ran a capsule article that was headlined something along the lines of "Bad Nu-Metal Band Clearly Not Listening to Its Influences." The article went on to point out the hilarity in some eighth-generation, watered-down grunge band saying that they're influenced "by Zeppelin and Sabbath," when they actually sound like a Bush cover band. Now, I can't say I know for sure what the guys in Q and Not U would list as their "influences," but I'd be willing to wager that they ARE listening to them, and closely. In the hypothetical music-critic review-vocabulary thesaurus, Q and Not U would likely be cross-referenced with any and all of the following entries:

Okay - enough of the vague and elliptical, and on to some facts, as I know them to be true:

The band formed in the Summer of 1998. There were four of them then. They made a single and an album with producers/engineers Ian MacKaye and Don Zientara. The records were called Hot and Informed and No Kill No Beep Beep, respectively. They toured a lot. They parted ways with the bassist. There were three of them after that. They began to reinvent themselves as a three-piece, doing fancy stuff like whipping out weird instruments and experimenting with crazy percussion and cool rhythms (all of it, amazingly, worked -- amazingly.) They made another single, and another album. They dubbed these records On Play Patterns and Different Damage. Different Damage was the full-length. It is quite good. Here is where we return to the aforementioned "vague and elliptical" structure and language.

There are a few sensations that are so utterly singular that they can never be completely replicated in any other context. For me, there are three that spring to mind. First, there is the feeling of my stomach, sinking with unearned guilt, as I realize that the car that has been following me down a residential street in the middle of the night for the last several miles is a police cruiser. I have done nothing wrong, but does the cop know that? Second: A person need only mention "fleas" in my presence to inspire bouts of paralyzing itchiness. Logically, I know there are no fleas on me, but psychosomatically, I am under siege. My brain and my body do battle, and the body wins. It is frustrating, yet oddly satisfying in it's simplicity. The third, and final sensation, for the purposes of this piece of writing, is the one that justifies the preceding paragraph. It is the sensation of hearing the music of Q and Not U; in my headphones, through my speakers, in the car, live onstage, on a jukebox, or in the shower (as mimicked, cruelly and unfortunately, by me). The music makes me feel guilty for even attempting to classify it or quantify it. It is it's own genre, sound, mode of communication. It is everything that got me into music to begin with. - Ben Boyer

Q and Not U, comprised of John Davis, Harris Klahr and Chris Richards, formed in the summer of 1998 (along with former member Matt Borlik) and began playing out in November of that year. The band's first release, the Hot and Informed single, came out in April 2000. The band's second release, the No Kill No Beep Beep full-length record, was released in October of 2000. Following extensive touring on behalf of No Kill No Beep Beep, the band parted ways with Borlik in late 2001. Q And Not U released a new single on vinyl and compact disc, called On Play Patterns, in April of 2002. In October of 2002, a new full-length album, Different Damage, will be released. Like everything else the band has released, it is on Dischord Records and was produced and engineered by Ian MacKaye and Don Zientara at Inner Ear Recording Studios. Tours of the U.S., Canada, Europe and Japan will unfold throughout the next nine months in support of Different Damage. 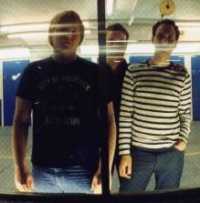