In 1994, the two remaining members of prominent Los Angeles thrash band PSYCHOSIS formed the original lineup of PROTOTYPE. Kragen Lum (guitar) and Vince Levalois (vocals, guitar), together with a new drummer and bassist, recorded three of their newest compositions for their highly acclaimed "Seed" demo. Critics worldwide have praised "Seed" as one of the top metal recordings available, even referring to it as a benchmark for today's aggressive/melodic progressive metal.

After extensive club appearances in support of "Seed," Lum and Levalois reentered the studio in 1997 to record their independent CD "Cloned," which again received international critical and fan acclaim. This session marked the first collaboration with new drummer Pat Magrath, formerly of Edel America Records act Killing Culture. Bassist Kirk Scherer joined PROTOTYPE in 1999. His solid rhythm and songwriting abilities completing the band's former lineup. Having parted ways with Magrath in 2002, PROTOTYPE has collaborated with session drummers and is looking to find a permanent replacement by holding auditions.

PROTOTYPE has and continues to support today's most renowned metal acts. The band has previously shared live billing with FATES WARNING, STRAPPING YOUNG LAD, DEATH, HAMMERFALL, NEVERMORE, MERCYFUL FATE, ENTOMBED, EXODUS, FLOTSAM AND JETSAM, MORBID ANGEL and GRIP INC., among many others. These professional collaborations have provided the experience and knowledge needed to excel both on and off the stage.

Based in Los Angeles, PROTOTYPE continues to push the boundaries of metal's status quo. Throughout the years, the Lum/Levalois songwriting team has produced some of the most innovative progressive/aggressive music in the worldwide underground metal scene. The band breaks the rules of meshing styles without compromising musical integrity. Their songs boast an array of powerful melody, progression and passion combined with futuristic overtones, while still retaining a heavy attitude. Levalois' lyrics poetically and often metaphorically explore topics of history, humanity and the questioning of one's faith. These phrasings are honest words derived from personal emotion, conflict and educated experience, which serve to reinforce the band's drive and musical direction.

The partnership of Lum and Levalois has flourished for more than a decade, during which time they have developed local, national and international recognition through extensive club performances and one-on-one communication with fans and press at home and abroad. PROTOTYPE continues this grass roots approach to self-promotion by distributing their albums through independent retailers worldwide, and by securing airplay on U.S., South American and European radio programs, where they have achieved regular to heavy rotation.

In recent years, they have gained additional notoriety through numerous successful tribute albums. PROTOTYPE has been invited to record songs from pioneering metal bands--from Metallica to Rush, Iron Maiden to Testament--for inclusion on commercially distributed CDs honoring the veteran acts. Their renditions of these classic metal anthems have attracted a legion of new fans for their original material. In fact, their versions of Metal Church's self-titled song and Metallica's "Battery" have held the #1 position on the metal chart at mp3charts.com for months on end, averaging over 200 downloads every week! Similarly, PROTOTYPE'S original recordings and tribute songs dominate the Progressive and Thrash Metal charts at the high-traffic Mp3.com site, where they are consistently found toping the Progressive Metal and Thrash Metal charts.

Distribution for "Trinity" has been secured for U.S., Canadian and South American territories, with Europe closely following thanks to recently singing a Management deal with renown management outfit IntroMetal Management (www.intromental.com). "Trinity" is now available for purchase online and through retailers.

The band is currently seeking to secure a recording contract so that their music can reach listeners beyond the limits of their independent self-promotion. Fans and critics alike agree that this action from the music industry is long overdue. 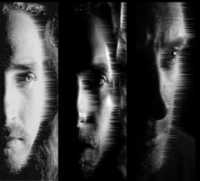