Full Name
Prince Rogers Nelson. From the 7th of June 1993 to May 17th 2000 he used the stage-name . Now his stagename is once again Prince.

Status
Single?
Sources in the media insist that Prince recently married a Paisley Park employee named Manuela Testolini (Mani).
No official confirmation has emerged though.
He was married to Mayte Garcia from 14th of February 1996 to 14th of February 1999, when the marriage was anulled.

Instruments Said to play at least 27 instruments, but on stage his focus is on guitar, bass, keyboard/piano and sometimes drums. Not to forget the voice.. his most important instrument.

Nicknames Skipper (given by his mom) , His Royal Badness, The Purple One.

Records Prince holds the record for longest pop-album, Emancipation (1996), which is exactly 3 hours long! In September 1992, Prince signed a contract with Time Warner worth $100 million. At the time, only Michael Jackson had a bigger contract. 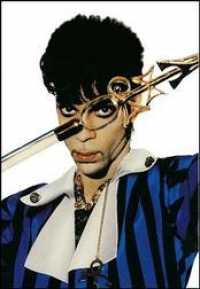