In a world that is all too anxious to reward the wrong types of role models, Prima J just want to do make sure they do things right. And as can be heard on their self titled debut album, there’s nothing wrong with that at all.

They were born Jessica and Janelle Martinez (but you can call them Jesse and Nelly), raised in the predominantly Latin-American Los Angeles suburb of Rosemead, and realized early-on that they wanted to be performers. How early-on? They were barely old enough to talk when they started performing their own choreographed cheerleading and dance routines for their family every week during halftime of Dallas Cowboys football games. With five uncles, two aunts, and at least three cousins with each, those family gatherings were large, which explains why the girls, then four, have no problem strutting their stuff in front of audiences more than 15 years later.

It’s also why they have had no problem staying centered and focused amidst the whirlwind that has surrounded the duo since they splashed onto the pop scene last summer with their debut single “Rock Star.” As Mexican-Americans, they hope to be role models to both American and Latin girls, as they consider themselves the face of the new Hispanic in America, part of an emerging generation that “speaks English and lives Latin.” They even go so far as to affectionately refer to each other as “chilosa,” a word Jesse and Nelly have coined to describe themselves, and those like them: Sassy, classy, spicy and feisty girls who are independent, know who they are inside-and-out, and don’t have to pretend to be something they’re not to impress the people around them.

Just like Prima J, “chilosa” describes the fun and fearless girls next door with a lot of spirit and a deep-rooted sense of self-confidence. After selling nearly 200,000 digital copies of the “Rock Star” single and having the video viewed more than 6 million times on YouTube alone, the girls are primed to build on their grass roots foundation and make an even bigger impact with their eponymous Geffen Records debut. “We want to have a good time, but we also want to send a positive message to younger people,” says Nelly. “Too many people don’t know that if they set their mind to it, they can accomplish anything, just like we have.”

Prima J’s achievements are well-documented on their album, which was recorded with the guidance of executive producer and Geffen chairman Ron Fair. The girls couldn’t have asked for a better mentor, as Fair’s worked with artists including Christina Aguilera, Keyshia Cole, The Pussycat Dolls and Blackeyed Peas making him one of the most respected and sought-after names in popular music.

“I haven’t been this excited about a new artist since I signed Christina Aguilera,” raves Fair. “Prima J is more than just a Latina thing, their music is hip-hop, pop, R&B and dance all mixed together with their own unique flavor. Geffen Records is fully behind these girls, and I truly believe that they will be massive around the world.”

From the Spanish-flavored acoustic strains and the supple, street-seasoned heartbeat that pulses through lead single “Corazon (You’re Not Alone),” through the booty-shaking hip-hop sass and sexy swagger of “Tame,” and beyond the infectious bass-thump and dance floor energy of “Boom,” the album resonates with a fresh feel and contemporary groove. “We worked so hard, in and out of the studio, to make sure that this record is the best that we can make, and we are so happy with the finished product,” gushes Jesse. “There are a lot of up-tempo dance party tracks, and some slower tracks that we know all of our fans will be able to relate to. We are so excited, because the album is hot!”

If their early work to promote the album is any indication, things are just starting to heat up for the girls, who debuted material from the new release live in front of a crowd of more than 50,000 at the MTV Tr3s-sponsored “Fiesta Broadway” in downtown Los Angeles in late April, and shared another close-to-home billing two weeks later at the world-renowned KIIS FM Wango Tango radio festival. As a testimony to Prima J’s impact within the Latin-American community, they were the first artist to ever be featured on the cover of Latina magazine without having a record in stores, and are the subject of a 16-part Telemundo special “Prima J: Inside Out” on the MUN2 network.

“Janelle and I have been so busy trying to make sure that Prima J comes out with a bang, but we couldn’t do any of this without the love and support of our fans, because without them, we would never be able to accomplish all of these amazing things,” says Jesse, her cousin adding, “None of this has hit either of us yet. I feel like I’m dreaming and someone needs to wake me up! It’s one thing to record a song and a video, but it’s another thing to hear it on the radio or see it on TV. That’s where it’s really hitting me…”

Forgive the girls for not having teen-idol egos, but they’re just too happy and excited to be doing the same thing they’ve been doing for most of their lives—singing and dancing. And they’ll be doing a lot more of it in the months and years to come. They have recorded an exclusive video for Latina.com for what is sure to become one of their calling card songs, “Chilosa,” a lush patchwork of mesmerizing rhythms, hypnotizing beats, and the girls’ Latin-textured hip-hop delivery caressed by alluring background vocals. The duo’s soft and scintillating vocals lift “Flip the Script” to soothing and satisfying heights, while the more light-hearted “Girlfriend” and “Homework” deal with universal themes that their fans are sure to appreciate – Men, particularly the ones that act like boys. One of the album’s most remarkable tracks, meanwhile, wasn’t even meant to happen.

As fans of Alicia Keys, Jesse and Nelly were toying around with her ballad “Nadie” while they were in the studio, translating some of the song to Spanish while keeping other parts in English. They made a video for the song, as well, which has been viewed more than two million times on YouTube.

From their impromptu routines in front of their family, to the more mapped out choreography they enjoyed while dancing and cheerleading in high school, to the their discovery by Stefanie Ridel, a former bandmate of Stacy “Fergie” Ferguson in the pop act Wild Orchid, it’s been nothing but a natural evolution for Prima J. Ridel took the pair under her creative wing, and quickly realized that while trios are a lot more common than duos in pop music, this pair would survive just fine on their own. Prima J are a high-energy pair of real-life girls next door that blend the energy of Janet Jackson and the spunk of Gwen Stefani with the urban pop of TLC and the hip-hip bop of trailblazing duo Salt-N-Pepa.

“We’ve always stuck together, and we’ve always had that fire and known that we really wanted to do this,” says Jesse. “If one of us was good at something, the other was just as good, because we always did everything together.” “And, if one of us ever thought we couldn’t do something, we’ve always been there to support each other,” adds Nelly. “We’re so close, we’re like sisters, we’re best friends and we’re never apart. This is just a dream come true.”

“Now that we’ve gotten this far, we’ve realized that it doesn’t matter if you’re the average, girl-next-door type,” sums Jesse. “It doesn’t matter what you look like or where you’re from, you should never think that you can’t accomplish something.” 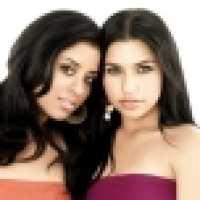