Porter's broad smile, flashy costume and memorable song-is the very image of a country music star. Indeed, he is a veritable icon in the country music industry.

Porter's career has taken him from strumming a guitar in a grocery store, in his hometown of West Plains, Missouri, to singing on stages around the world. He would be the first to tell you that the place he is proudest to perform is the Grand Old Opry in Nashville, Tennessee.

His guitar playing and singing as a youthful grocery clerk inspired the store owner to sponsor an early morning radio show featuring Porter. The store owner's idea of drawing customers to his store instead launched a career of amazing accomplishments and longevity.

Porter's recording career was launched in 1955 when he signed with RCA Records. Almost immediately, he had a Number One hit with "A Satisfied Mind." Just two years later, in 1957, he was invited to join the Grand Ole Opry.

Today, Porter is one of the Opry's most popular stars. He represents the Opry in many roles (he once even rang the opening bell at the New York Stock Exchange on behalf of the Opry's parent company, Gaylord Entertainment).

Television has been a major part of Porter's time in the public eye. He started the syndicated "Porter Wagoner Show" in 1960 and it remained on the air for 21 years. The "Porter Wagoner Show" was a key factor in popularizing country music across the United States, and it is easy to think of it and the syndicated country music shows of that time as predecessors to today's TNN: The Nashville Network and CMT: Country Music Television.

Although Porter says an audience's applause is his greatest acknowledgment, organizations have honored him with numerous awards. With singing partner Dolly Parton, whom he auditioned and made part of his show in 1967, he won a Grammy Award for "Just Someone I Used To Know" in 1969. Wagoner and Parton were named the Country Music Association's "Duo of the Year" for three years in a row.

A big portion of Porter's life is told in delightful detail in a biography titled A Satisfied Mind: The Country Music Life of Porter Wagoner. The only trouble with the book is that new chapters will be needed someday, because Porter keeps on singing and accumulating stories worth saving.

Porter is widely acknowledged by new country performers as the epitome of showmanship. New performers who truly are trying to learn the business, watch Porter to see how he puts on a total show, how he makes everyone in an audience feel special, how he himself enjoys performing. Porter wouldn't say he is doing anything special, because he is just being himself. 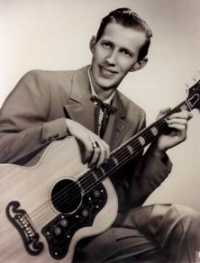