It's hard to believe that it's been ten years since we were first introduced to Christian supergroup Point Of Grace. In that time, the fresh-faced, small town girls who urged us to "Gather At The River" and "Keep The Candle Burning" have become bonafide, multi-million selling pop stars with 21 consecutive #1 hit singles, Gold and Platinum albums, multiple Grammy nominations and numerous Dove Awards to their credit.

After enjoying a decade of unparalleled success, it would have been easy for Point Of Grace to rest on its laurels and duplicate its previous work on the new album, Free To Fly (Word Records), set for a May 2001 release. Instead, Shelley Breen, Denise Jones, Heather Payne and Terry Jones decided that it was time to push the sonic envelope a bit and try something new. They approached the making of Free To Fly in an entirely fresh way, and created an album that is distinctly Point Of Grace but with an edgier, funkier pop sound.

Following the release of the seasonal album A Christmas Story in 1999, the group took a well-deserved, year-long sabbatical. "We had been working for 10 years straight, and we never took a break until after the 1999 tour for our Christmas album," says Terry. "It was a refueling and reinvigorating experience to step back, take time off and focus on our families and friends."

During their break, the members of Point Of Grace concentrated on their personal lives. Both Terry and Denise had new baby boys and spent time with their older sons. Denise also completed her college degree via a correspondence course. Shelley and Heather enjoyed relaxing with their husbands and friends. The women also had time to perform at Women of Faith conferences, and made an effort to really study today's pop music scene.

"It was a good time for us to get a feel for pop culture and what's out there," says Shelley. "I enjoyed sitting at home and being an observer."

Denise adds, "We get so caught up in what we're doing that we don't have time to listen to the radio and look at the world in general. This was a great time for that."

The women returned from their time off rested and ready to reunite with new ideas and an energized perspective. As always, the members of Point Of Grace had to unanimously agree on song selections and musical direction. One of the key decisions on Free To Fly was to work with David Tyson, whose credits include Amanda Marshall, Jude Cole and Alannah Miles ("Black Velvet"). Tyson, based in Los Angeles, produced the cuts "Free Indeed," "Something So Good," and "By Heart." "David has a different ear," Heather reflects. "He brought a very contemporary pop sound with more grooves and nuances to the record. For Steady On, we wanted a more live band feel. But with Free To Fly, we wanted something different: an edgier, slightly more programmed sound. But of course, we kept the core of who we are. We've just turned it up a notch."

Point Of Grace also enlisted the help of producers Brown Banister and Nathan Nockles, both of whom they've collaborated with before, as well as Tom Laune, Glenn Garrett and Wayne Tester. "We wanted to work with different producers in different settings," Shelley says. "I think that it added a lot of energy to the project."

Denise adds, "This record is 'sugar and spice.' There are sweet moments with the crisp, clear and clean vocals that we're known for. Then there's spice-songs with a little harder edge, a little more rock-and-roll. But we always sound like Point Of Grace."

The group's signature sound is a seamless blend of four voices into a unique element that also features each member trading lead vocals. Songs like "Free Indeed," "Blue Skies," "You Will Never Walk Alone," "Something So Good" and "Begin With Me" incorporate elements of funk, rock-and-roll and pop, but are united by Point Of Grace's unmistakable harmonies.

And, as always, the theme of each song on Free To Fly reflect the members' deep-rooted faith. In fact, as the recording process began, individual songs took on a special significance for the women.

"'He Sends His Love' is very meaningful to me," says Shelley. "We get so many letters from young teenage girls asking for advice about life. That song is written in the form of a letter, and it's like we are musically responding to our fans. We are telling them in song to be strong and to have faith."

The song "Blue Skies" particularly ministered to Denise. "While we were recording (the song), my husband was having hip trouble and the doctors found a tumor in his thigh bone," Denise recalls. "While we were waiting out the results of his tests, we were doing the song. It talks about how, in trouble and in bad times, we have God to see us through. Through the five days of waiting for test results, I thought about the lyrics of that song a lot. It turned out the tumor was benign, and my husband is fine. But that song really sustained us."

Faith in God and a love of singing - the elements that originally brought the members of Point Of Grace together - have kept them going strong for a decade. Formed in 1990 on the campus of the Arkansas college they attended together (although Heather, Denise and Terry also went to the same Oklahoma high school), the women knew immediately that their four voices created a special sound. "It was magical the first time we sang together," Denise recalls. "It was amazing."

Influenced by Sandi Patty, Amy Grant, Michael W. Smith and Wayne Watson, as well as by vocal harmony groups like Chicago, Manhattan Transfer, and En Vogue, Point Of Grace's self-titled Word Records debut earned them six # 1 singles, an achievement still unmatched by any artist in any genre of music. The group's follow-up albums, The Whole Truth; life, love & other mysteries; Steady On and A Christmas Story, continued to build on Point Of Grace's trademark harmonies. With each release, the group expanded its audience while garnering 21 consecutive #1 hits. A favorite of fans and critics alike, Point Of Grace gained national media exposure on programs like "Entertainment Tonight," "Regis and Kathie Lee," "CBS This Morning," "The View", "Good Morning America" and VH-1, as well as with articles in The New York Times Magazine, USA Today Weekend and Time Magazine. In early 2000, the group released its "greatest hits" collection, Rarities & Remixes, a compilation of 15 cuts from past projects.

So what's next for this fearless foursome? The group is already planning a major, nationwide Free To Fly headlining tour, and is laying plans for "Girls of Grace," a conference aimed at teenagers that will take place in 2002. "'Girls of Grace' is a long time dream of ours," Shelley says. "We have appeared at the Women of Faith conferences and we want to expand that idea. We plan to have a conference that will incorporate speaking and meeting with young women in small groups. The event will end with a concert. It also works hand in hand with Mercy Ministries of America, another organization we have supported for a long time. That group helps unwed teenage mothers as well as girls with drug problems, eating disorders and other issues."

For Point Of Grace, Free To Fly is both an album title and a commentary on the members' approach to their personal lives and careers. "We have a sense of freedom about who we are and what we do," Terry says. "We're so excited about our music and we are looking forward to sharing it with our fans. That freedom to be ourselves and to express our faith through our music is what makes this CD so meaningful to us." 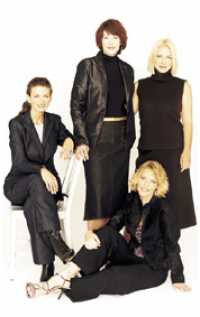