The Planet Smashers are :

Five brave men race against time to complete a daunting and dangerous task... Risking their own lives, and that of every man, woman and child on Earth to implement their incredible scheme... Their destination: the farthest stars in the universe... Their mission: complete pangalactic domination... They are... Initial sightings, immediately dismissed by the authorities, were reported in the spring of ‘93. As most of the ‘contactess’ were morally-bankrupt drunks from the Montreal area, the media paid little attention to the five shady characters, who were quietly formulating a lethal strain of ska.

By tampering with the fundamental genetic structure of the ‘ska bug’, they were able to generate a sound so infectious, it induced lab rats to perform crude emulations of human ‘skanking’ at such an accelerated pace that they all had little brain aneurysms and died. Reports of Smasher activity increase daily, particularly along the Boston/New York corridor, southern Ontario,and now four times across Canada. Crowds screamed when the Smashers appeared alongside Buffy Ste. Marie in Yellowknife, NWT. Brains exploded when the Smashers infiltrated a Montreal performance by Australian ABBA impersonators Bjorn Again. Children ran for cover when the Smashers invaded Montreal and Quebec at this year’s Warped Tour. Heads of state wept openly when the Smashers joined Hepcat, Skoidats,New York Jazz Ensemble, and many more at a top secret ska summit just outside of Boston. Can anything stop this quintet of terror, who rise phoenix-like from the ashes of tragedy?

Former bassist Ceco Munaretto, as well as original brassholes Travis Wilkinson and Andrew Skowronski were lost in a horrible, Challenger-style accident of a rather suspicious nature. While horribly scarred, ‘Mighty’ Matt Collyer refused to surrender his post as Vocal Communications Officer and Troubleshooter, ‘Daring’ Dave Cooper was reassigned from drum duty to the post of Bass Engineer. A new Battery Sergeant was recruited - muscling his way in was Tim Doyle, member of a shadowy sister organization known as Gangster Politics. Greenhorned rookies Kurt Ruzchiensky and Leon Kingstone signed on as Trombone and Sax Technicians, respectively. This solid team of dedicated professionals were now ready to tear ‘Planet Smashers, Mark 2’ off the drafting table and unleash it upon the world’s helpless populace.

Already the mechanisms of fatal planetary bigshotness have been stealthily slipped into place. It seems theyoung people of Earth are hypnotically attracted to noisy, shiny things, so the Planet Smashers have subverted the technology of ‘videos’ (Mission Aborted - shot on the set of The X-Files, My Decision, and Change) and ‘compact discs’ to further their uncanny plans. In the summer of ‘97, the Smashers unveiled their most potent device yet... "Attack of the Planet Smashers". "Attack of the..." received extensive radio play, charting No. 2 for two months on the National College Radio Association Top 50 and hassold over 12,000 copies! 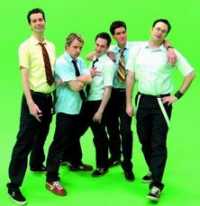