Brian Molko, Stefan Olsdal and Steve Hewitt. Placebo. An American, a swede and an englishman. A bisexual, a homosexual and a heterosexual. These three men crashed into the world of rock and haven't looked back since...
Meeting by chance in a London tube station, old classmates Brian Molko and Stefan Olsdal got talking and Brian, noticing that Stefan had a guitar strapped to his back, invited him to come and watch him sing and play guitar... The two guys hadn't been friends at the school they went to in luxembourg, Brian had been unpopular- preferring drama to sport- and Stefan was a star player on the basketball team... But by the end of that evening stefan came up to brian and said 'lets start a band'. This is quite incredible as brian says that in the space of 7 years him and stefan may have exchanged 'one sentence', and now all of a sudden they were starting a band.
Brian had been playing occasional gigs with a guy called Steve Hewitt who he had met outside of burger king in 1991, through a friend of his who was Steve's then girlfriend. Steve didn't play drums for Placebo at first as he had another band he was committed to at the time called Breed, he only played on occasional placebo demos... This is where swedish drummer Robert Schultzberg comes into the picture. Robert had been with Stefan at school in luxembourg and in a band with Stefan in sweden. This was placebo mark 1.

This wasn't meant to last it seems, as tensions ran too high between Brian and Robert, Brian thinks it may be beacause he had more attention and was more flamboyant than Robert, but Robert was asked to leave the band just before a gig at 'the white room'. And from then on Steve Hewitt permanently re-joined the band.
During 1995, Placebo released a single 'bruise pristine' and toured with ash, whale and bush and in 1996 signed a deal with hut records... Just 51 weeks after their first ever gig. They also set up their own label, elevator music. They began life with hut with the acclaimed first single 'come home' and part way through '96 toured the UK with belgian group evil superstars and then toured with David Bowie around europe, playing to crowds of 8,000- 12,000 people. Bowie became a fan of the band and invited them on several more of his european dates.
Placebo's first album was recorded in 1996 in Dublin and the singles 'teenage angst' and '36 degrees' were also released that year... The self titled album went on to achieve gold status and if anything more was needed to secure placebo's fame it was the 1997 breakthrough single 'nancy boy', this got to number 4 in the UK charts.
Incredibly, Placebo played in Madison square garden the same month as nancy boy was released, to celebrate David Bowies 50th birthday. They re-released 'bruise pristine' and started to headline their own shows at brixton academy, london.... Then they supported u2 on many popmart european dates.
In 1998 Placebo were invited to star alongside ewan Mcgregor and Eddie Izzard in the glam rock film 'velvet goldmine' by REM frontman and executive producer Michael Stipe... This was great for Brian as he is an accomplished actor and was now living out his first love... 1998 also saw placebo back in the studio working on a much anticipated second album.... a collection of love songs and loneliness, called 'without you i'm nothing' the first single form this album 'pure morning' went straight to number 4 in the uk charts, despite placebo's long absence from the mainstream music scene... David Bowie lent his vocals to the forth single from the album 'without you i'm nothing'. Also for the pleasure of Placebo's French fans the band released a french version of 'burger queen'. Other singles that came off this album included 'you don't care about us' 'allergic'and 'every you every me'(which was also used on the soundtrack to teen flick 'cruel intentions')
Placebo returned in 2001 with another highly anticipated album of 'anger and energy' called black market music. The first single lifted from this album was called 'taste in men' and was a new start for placebo's music with a trance synth in the background and wailing distorted guitars, taste in men was a strong first single from an equally strong album..... much followed including 'special k' 'slave to the wage' 'black eyed' and the controversial 'commercial for levi'. More sold out shows at brixton came about and amazingly brian allegedly pronounced himself a monogamist.
A two year silence followed but that was soon shattered when placebo came back with a new album 'sleeping with ghosts'. With a powerful instrumental 'bulletproof cupid' slower ballads 'centrefolds' and 'i'll be yours' and full on rock 'the bitter end', 'plasticine' and 'second sight' sleeping with ghosts secured Placebo's place in rock's finest.
The trio sold out venues in Brixton and Manchester in 2004 and also created a bit more for their history by playing their first wembley gig (almost a sell out). This followed a singles collection entitled 'once more with feeling', a single entitled '20 years' and a dvd including all their videos and an exclusive documentary interview with the band members.
Placebo ended 2004 on a high, their popularity and fan base bigger than ever and everyone eagerly awaiting their return in 2006.... This is no way the bitter end for the guys. 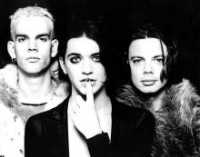