PHANTOM PLANET IS GOING TO BE HUGE.…

...If they keep eating the way they do. During the recording of their Epic Record's debut THE GUEST, the band consumed an average of 20 pounds of food per day. In total, that adds up to a whopping 840 pounds of hamburgers, pizza, pasta, sushi, tacos, hot dogs, fried chicken, chips, and chocolate cake.

"Ever since we formed this band, we haven't been able to control our appetites," says vocalist Alex Greenwald.

The message is clear! KEEP EATING!

THE GUEST is a collision of youth and melody set to a soundtrack of contemporary guitars and atmospheric samplers. Influenced by bands like Elvis Costello and the Attractions, U2, Air, and the Flaming Lips, Phantom Planet manages to create a record that puts them in their own very special category. "It's a big step since our last record " says Greenwald. "We were kids who had just gotten our drivers licenses. Now we are four years older, I got my license revoked, and we're ready to make some real rock and roll."

In the years since the first record, the band has kept busy with an array of exciting projects. Greenwald worked on a slew of commercials, and a co-starring role in the upcoming independent movie Donnie Darko, while also producing a song by the band Rilo Kiley that ended up on MTV's Undressed Soundtrack. Jason Schwartzman acted in several movies including Slackers, which will be released in January 2002; and he just wrapped the bizarre comedy Spun where he has a starring role. Jacques Brautbar has been pursuing a degree in music at the University of Southern California; quite an honor considering only seven students are accepted into the prestigious program each year. Darren Robinson has been mastering the art of ProTools and helping with the maintenance of the PHANTOM PLANET website. Sam Farrar has just finished producing Los Angeles band Rooney’s album (not yet titled) that is scheduled for release this year.

In early 2001, the band began recording THE GUEST with Producers Mitchell Froom (Tom Waits, Crowded House, Cibo Matto, Elvis Costello, Paul McCartney) and Tchad Blake (Pearl Jam, Peter Gabriel, and Sheryl Crow). Alex explains the recording process: "Mitchell and Tchad really pushed us to be the best we could be. We would constantly throw ideas at one another - at times it was hard to agree on certain things - but whatever ideas were left that we could agree on would make the songs ten times better than where they started off." "The production team was awesome...," drummer Jason Schwartzman adds, "...On our first day at the studio, our recording room felt cold and sterile - So, Mitchell and Tchad told us we could decorate it however we wanted. Something to make us feel at home. We ended up making our room look like a giant fish tank. We had huge inflatable fish, blue and green lights, and palm trees hanging from the ceiling. Alex thought it looked like California after a fault splitting earthquake had pulled i
t underwater. "

Well; the album is strong enough to withstand a thousand fault splitting earthquakes. The pairing of these veteran producers with the energy and youth of PHANTOM PLANET surpassed the expectations of everyone involved. This is immediately evident on the album's undeniably contagious opening track "California" with its road weary verse and fist pounding chorus. By the album's third track, "Lonely Day," with its lilting, carefree verse and exploding chorus and the fourth track, the refreshingly acoustic "One Ray of Sunlight", the band seizes you. And with "Anthem", the album's centerpiece, the message is clear: These boys will become pretentious, ego-driven, megastar deadbeats. That is, if they don't eat themselves to death first. 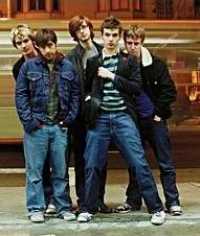