Formed by guitarist Fletcher Dragge and late bassist Jason Thirsk in 1988, PENNYWISE rose to prominence in the midst of the mid-nineties punk revival. Offering an alternative to their grunge-addled peers, PENNYWISE deliver a positive transcendental message of self-reliance. “Our music exists solely to inspire people,” notes singer and chief lyricist Jim Lindberg. “We want people to hear our music and feel empowered by it.”

On their seventh studio release LAND OF THE FREE?, PENNYWISE have turned their attention toward the issues of global politics, drawing inspiration from the worldwide WTO protests and the recent United States Presidential elections as fuel for their anti-establishment position. “In our opinion the right of free speech--our freedom to express our views, especially when they contradict those of our political leaders--is the central idea that our country is founded upon,” notes Lindberg. “Civil protest should be seen as a Patriotic endeavor. It's the people's means of checks and balances. This album is meant to be a soundtrack for political activists all over the world.”

Songs like “The World,” “Enemy” and “Whose Side Are You On” question the long-held distinctions of race, religion and nationality that help to create an atmosphere of distrust amongst people. “Fuck Authority” is a protest anthem set to a 4/4 beat which attacks all those institutions that abuse their power in the name of those they supposedly represent. “If your local police force is racist and corrupt, does it deserve your respect?” questions Lindberg. If your government is run by self-interested politicians who are unduly influenced by corporate lobbyists who make policy decisions based on their own religious beliefs, should you respect their authority?”

“It seems like in America much of the population has been lulled into a dream-like state of indifference and self-interest,” asserts Lindberg. “We want this album to be a wake-up call.” PENNYWISE have always tried to use their music as a catalyst to draw attention and bring support to various causes near and dear to its members hearts. When the band headlined the LA Sports Arena on the heels of their commercial breakthrough album Straight Ahead, the members of the band donated all of the proceeds--from what would have been their largest single payday--to local charities. The band have also donated their time and music to various benefit albums and charity performances with causes ranging from women’s shelters to environmental issues.

They’re also publishing a utopian manifesto from on the band’s website. “We’ve tried to lay out a concrete plan, something that we can point to as a black and white example of how the world can be changed for the better by the cooperation of like-minded individuals,” says Lindberg. “This manifesto will be a combination of ideas submitted to our website about how to improve the world and a real economic plan we will create with the help of scholars from various universities.”

The band’s first four albums (Word From The Wise, S/T, Unknown Road and About Time) became the soundtrack to the lives of their fiercely loyal fans who feel personally connected to both the band’s inspirational message and charging beats. The band returns that loyalty by keeping ticket and merch prices low and constantly intervening to make sure the rights of their fans are not violated. When confronted with having to raise their merchandise prices to accommodate an exorbitant venue fee at one-stop along the Warped Tour, the band refused to sell their merch on site and instead organized a barbeque outside of the venue where exiting fans could buy the Warped tour band’s t-shirts at a more reasonable cost.

Constantly striving to find ways to break down the barrier between the band and their fans, PENNYWISE invited 15 of their fans, chosen at random from the band’s website, to join them in the studio to sing back-up vocals on three tracks on their new album. “We all had a really great time,” recalls bassist Randy Bradbury. “It’s just too bad that none of them could sing,” he jokes.

After the loss of Thirsk in 1996, the remaining members of PENNYWISE were forced to re-evaluate and re-dedicate themselves to their message, which now took on a tragic sense of urgency. “We had written these songs that so many others had found inspiration in and now we had to come to grips with these things ourselves,” remembers Dragge. “It suddenly all became real…our time is short and you can’t waste a single second.” PENNYWISE dealt with this realization on their next album Full Circle, an emotional eulogy to Thirsk that expresses their grief and recommitment to the positive message embodied in the lyrics of songs like “Brohymm” and “Unknown Road.”

“For us, Punk music for us is about righteous anger and the naïve belief that in some small way together we can change the world,” says Lindberg. “At some point, punk rock came along and deeply effected the lives of everyone in this band, changed it, defined it and in many ways, saved it. We know it can do the same for others. We know punk can change the world and we’re never going to stop trying.” 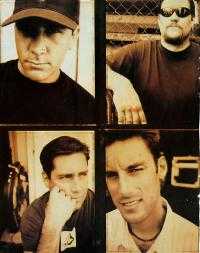