The genesis of Pearl Jam was rooted in chance and tragedy. Stone Gossard
(guitar) and Jeff Ament (bass) had both been members of seminal grungers Green River, and later MOTHER LOVE BONE with ex-Malfunkshun member, Andrew Wood, on vocals. When Wood died of an overdose, his longtime friend Chris Cornell (of Soundgarden) put together a tribute project called TEMPLE OF THE DOG (1991) -- Gossard, Ament and new recruit Mike McCready(guitar) were roped in, as was Eddie Vedder (vocals), who had provided some vocals for a demo tape put together by the others.

Once TEMPLE OF THE DOG was in the can Dave Krusen (drums) joined the other four. Flirting with different names on the way (Mookie Blaylock and Reenk Roink), they eventually settled on Pearl Jam, after an allegedly hallucinogenic recipe belonging to Vedder’’s grandmother. By spring 1991, Pearl Jam had begun to play live shows in the Seattle area supporting the likes of Alice In Chains. As the word spread about the Seattle scene, the band signed to Epic and their debut TEN (1992) was rushed out. Although it was recorded speedily, it distilled the pain and attitude of the disaffected, but injected it with an electric, classic rock feel. Gossard and McCready’’s playing owed as much to Jimi Hendrix as to any punk band. Vedder’’s lyrics and vocals carried a rare, raw emotion, and the soaringly poetic ““Evenflow””, ““Alive”” and ““Jeremy”” took elements of his own traumatic childhood and transformed them into universal experience.

Just as TEN entered the US charts, Krusen left to deal with personal problems and was replaced by Dave Abbruzzese. Fresh recording sessions produced ““State Of Love And Trust”” and ““Breathe””, for the soundtrack of Singles, a teen-romance comedy based on the Seattle music scene, starring Matt Dillon. Three of the band members even managed to make cameo appearances as part of Dillon’’s grunge combo, Citizen Dick. Despite this media exposure, the press were less than kind to Pearl Jam, reviews equating their driven sound with the rock dinosaurs of the 70s, while Kurt Cobain fuelled the controversy by calling them a corporate band (conveniently forgetting their lengthy apprenticeships for some of Seattle’’s finest). The fans on the other hand could not have cared less; TEN outstripped NEVERMIND in the US metal charts and outsold it worldwide in 1992.

A new album was planned for late 1992, but touring schedules slowed things to a crawl. Gossard kept himself fresh by working on SHAME (1993), the sole product of his Brad side-project; it was a mellow, danceable mix of psychedelia and funk rhythms. The summer of 1993 saw Pearl Jam providing support for NEIL YOUNG and tearing into soulful, breathtaking versions of old favourites along with fresh punk-inspired material. They joined Young for a powerful version of ““Rockin’’ in the Free World””, a song they reprised later in the year at the MTV Awards.

A new and important alliance had been forged.When VS. (1993) finally saw the light of day, the fan response was awesome, and it entered at #1 in the Billboard charts. The guitars and rhythms raged more freely, and Vedder displayed his vocal and lyrical diversity, with songs of raw, blood-curdling anger (““Go””, ““Animal””, ““Blood””) balanced by mellower textures (““Daughter””). Overall, it sounded more caustic, accomplished and mature than TEN.

Pearl Jam have always gone out of their way to be as accessible as possible; if fans write they will usually get a personal reply. This dedication to the public took a new turn in 1994. While continuing to tour, and make occasional appearances with Neil Young, they weighed in against the corporate might of the Ticketmaster booking agency, which they accused of raising prices beyond the spending power of their younger followers. They were joined in their protest by such artists as R.E.M., Aerosmith and, of course, Neil Young, and were to stay in dispute with the agency for the next two years.To show their faith in vinyl, VITALOGY (1994) was first released on record, and then on CD, which saw it rocket to the top of the Billboard charts. Tracks like the searing ““Spin The Black Circle”” and the belligerent threats of ““Not For You”” delivered the usual doses of mayhem. However, tracks such as the pointless ““Stupid Mop”” dragged on the album’’s momentum.

Apart from McCready’’s Mad Season side-project, 1995 saw Pearl Jam’’s partnership with Neil Young flourish, their encore jams developing into the poignant, broad sweep of the MIRROR BALL (1995) album. Recorded in a mere four days, the record was a potent blend of Pearl Jam’’s hard rock influences and Young’’s poetic meanderings, oiled with doses of teeth-grating, overdriven feedback. Unfortunately, in a fit of marketing pique, Young’’s record company refused to allow Pearl Jam’’s name to appear on the cover.Meanwhile the band, true to their word, continued to make a stand against Ticketmaster by touring less established venues. Progress was hampered by forced cancellations and security problems, but when things went well audiences were treated not only to Pearl Jam, but to Young joining in on songs from MIRROR BALL.

The following year saw the band lose Dave Abbruzzese and finally focus their collective attention on a new studio effort. NO CODE (1996) was steeped in the all-American tradition of garage punk but instead of lunging headfirst into a soundscape of heaving guitars the songs marked out a more thoughtful approach. Opening track ““Sometimes”” was a slow burner and it wasn’’t until ““Hail Hail”” that things kicked off in familiar style. What the album lacked in pace it made up for in poise and moving, troubled lyrics.

Overall, though, it received a less-than-ecstatic reception and the band turned back to what they knew best for YIELD (1998) and the live opus LIVE ON TWO LEGS (1998), straight-ahead hard rocking. While LIVE ON TWO LEGS featured former Soundgarden drummer Matt Cameron (replacing Jack Irons) as part of the live set-up, he actually contributed to the writing of new LP BINAURAL (2000). As ever it was a tour de force showcase of the band’’s subtlety and power, addressing both social and personal issues with a deft touch. Later that same year, as if to emphasize the band’’s punk credentials, they also opted to release a series of 25 official live bootleg CDs, all of them recorded warts ‘‘n’’ all during their European tour.

The tradition of releasing such bootlegs has continued through each tour in the past few years, and Pearl Jam now hold the World Record for most songs in the Billboard Chart at once, thanks to bootlegs.

In 2000, a tragic safety failure at Roskilde claimed the lives of 9 fans and Pearl Jam took this as their responsibilty which it wasn't. The Danish authorities didn't help either, by claiming the band were to blame, although these claims were quickly dumbed down. The Roskilde incident left a huge mark on Pearl Jam's attitude and music, and the band released a statement implying they would probably never play a festival again

In 2002 the band released "Riot Act", which contained a mix of acoustic and hard-hitting rock songs with titles such as "Ghost" and "Thumbing My Way". The album title is rumoured to either be named after the "Riot Act" or the "Patriot Act", or maybe a play on both by Vedder. The album's first single "Love Boat Captain" contained the lyric "Lost 9 friends we'll never know", a tribute to those lost at Roskilde in 2000.

PJ split from Sony Records after 10+ years under contract, and so Sony cashed in by releasing a 2 Disc greatest hits titled "Rearviewmirror". After many dubbed PJs split from the money grabbing record company, they signed a contract with J Records, an affiliate of Sony, showing that it's difficult to be a big band without the support of a big company these days.
However, their music is now more independent and free from constraint, and the band have total control over their music and speed of how they do things.

Pearl Jam took part in the Vote For Change Tour in 2004, aimed at raising John Kerry's vote in the US Elections (PJ are strongly against George W Bush)and played at many undecided states such as Boston. Eddie Vedder was quoted as saying that Pearl Jam would move to Canada if Bush won, and he did, but they remain in the US.

Pearl Jam did a South American tour in late 2005, amid rumours that the new album would be released in early 2006. Sure enough, in February '06 Pearl Jam announced the new album "Pearl Jam" would hit stores on May 2nd. The first single was accepted as a "grower" and the band were quick to sell out tickets to a North American tour and book festivals across the world, breaking their no-festival stance to the joy of festival goers and organisers.

It is rumoured that Pearl Jam's self titled album is a sign of their acknowledgment that the end is near. Perhaps family commitments and such will slow the band down, maybe stop it all together, but I personally feel that Pearl Jam crave their career as passionate music makers too much to stay away from the music, and we can expect their already lengthy careers to become more fruitful and evolved over the next few years! 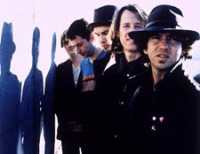