Born in 1958 and raised in Woking, Paul Weller formed The Jam at 14, who were influenced by The Beatles, Amen Corner and The Small Faces. In 1976 after hearing The Who's 'My Generation' and seeing The Sex Pistols play London's Lyceum, Weller found the direction he was looking for and established the blueprint for what would be Britain's biggest band for the next five years.

From the release of their debut album 'In The City' through the seminal 'Down In The Tube Station' and 'That's Entertainment' and the classic straight-in-at-number one singles 'Going Underground', 'A Town Called Malice' and 'Beat Surrender', The Jam were a huge critical and commercial success. Weller penned a succession of songs, brilliantly reflecting his audiences experiences, until in 1982, convinced he'd taken the group as far as he could, he split The Jam to form The Style Council.

Radically different to The Jam, The Style Council, incorporated touches of jazz, r'n'b, funk & soul, meshing with Weller's pop instincts. A string of classic singles from 'Long Hot Summer', 'You're The Best Thing' and 'Shout To The Top' to 'Life At A Top Peoples Health Farm' were evocative anthems of 80's Britain.

Following the computer programming, studio-based sound of The Style Council, Paul spent the next two years re-inventing himself. He returned to his roots, going back to the live-based, raw guitar sound and began work on his own solo album, eventually signing to Go! Discs. His eponomously titled album went straight into the Top Ten. In the US 'Paul Weller' outsold all previous work by The Jam and The Style Council.

While his first solo album had firmly established Paul Weller as a potent solo artist, the second album, 1994's 'Wild Wood', was to see him hailed as one of the finest British songwriters of the last three decades, being seen to many as the English equivalent of Neil Young. 'Wild Wood' was nominated for the 1994 Mercury Music Prize, saw him winning a Brit Award for Best Male Solo Artist and went on to sell 2 x platinum. He was also honoured with an Ivor Novello Award for his outstanding contribution to songwriting.

1995 found Paul Weller riding high on a heady mix of popularity and critical acclaim leading up to the release of 'Stanley Road'. With the year already heralding further awards with a second Best Male Artist at the Brits, two NME Brat awards - one for Best Solo Artist, and the other for his all important live work. Celluloid achievements included a film documentary 'Highlights and Hang-Ups', the first ever 'Later With Jools Holland' TV Special, and an accompanying 'Live Wood' video of 1994's live CD of the same name.

'Stanley Road' managed to even outstrip 'Wild Wood' in its critical acclaim and sales which, after going in straight at No 1 and spending more than 12 months in the UK Top 20 - and included 4 Top 20 hit singles - went onto become 4 x platinum status.

By the release of Paul's next album, his career path had reached a rather auspicious milestone. As of May 1997, he had spent two decades as a record-releasing artist, a statistic marked by the release of a gleaming box-set and the requisite salutes to his first group.

In many other cases, of course, the celebrations would have an uncomfortably hollow ring, throwing an undoubted decline in standards into sharp relief. How many talents, after all, can claim to be burning with admirable intensity after twenty years? By that point, most have either lapsed into self-parodic cabaret or long since disappeared.

The summer of 1997 saw the release of 'Heavy Soul', Paul's fourth studio album. Following the phenomenal success of 'Stanley Road', anticipation for the release was high. The album arrived harder, bolder than it's predecessors, the explanation possibly coming from the nomadic working practices that were adopted. Never one to use the same method twice, Paul worked in seven different studios, never being in one place for more than four or five days. The backdrop to the album's creation was not a harmonious one. Go! Discs - Paul's home since 1992's 'Paul Weller' album, and the company he had always credited with being in line with his musical vision - was closed down leading him into a period of uncertainty that was eventually resolved by a move to Island records. Secondly, his inner circle of musicians was forced to change when guitarist Steve Cradock and bassist Damon Minchella, who had been with him since 'Wild Wood' days, took the inevitable step of devoting their full-time attention to their own band, Ocean

Colour Scene. The album was played live at the now annual outdoor live London event as well as the regular tours round the country. The previous summer saw him headline 'Lazy Sunday Afternoon' at Finsbury Park and this year he would play Crystal Palace at 'A Day At The Races'. The album sold more than any other first week and would spawn four Top 40 singles. A never before done stunt to announce the release of 'Heavy Soul' saw Paul playing on the roof of the Southbank Centre on the banks of the River Thames creating huge crowds to the free show.

Not only was this a 20 year anniversary, it was also time to acknowledge that for the third time in his career, Paul's new incarnation as a solo artist had been a brilliant success. 1998 saw the release of 'Modern Classics', a best of… collection of his solo singles. The name being all the more pertinent as it could be shortened to 'Mod Class'. It included the 16 singles to date plus the additional new song 'Brand New Start', another Top 20 hit. This summer he would again play outdoors to 30,000 plus people in East London's Victoria Park with a full day's line-up including special guests, the late Ian Dury & The Blockheads. The set would celebrate the solo career to date with a greatest hits set to tie-in with the best of album.

Ever the prolific songwriter, after the longest period of quiet since the start of his solo career, Weller was back a with new album. It wouldn't be until April 2000 that new studio record, 'Heliocentric' would arrive. Following the disappointing critical appreciation of it's predecessor, 'Heliocentric' would again see him heralded as one of a kind, the greatest recording artist of his generation. Written and recorded in the run-up to the end of a decade in which he re-established himself as a potent force on the UK music scene, the new album was a striking collection of reflections and restatements on life and principles.
Many people would see Paul playing live over the summer with festival appearances, tours and the major London live event - this time a run up to Christmas with the 'Ideal Pop Exhibition' at Earl's Court, almost selling out the 30,000 tickets before a full day's supporting cast were announced. Following the release of 'Heliocentric' would see the end of the Island records relationship and onto a new label in the form of independiente and back into the hands of the boss of Go! Discs.

Since February 2001 Paul Weller has been touring Europe taking in France, Belgium, Holland, Italy, Austria, & Ireland and is finally reaching the UK.

And so to 'Days of Speed'. An album of 18 songs showcasing an unbelievable career so far. Paul started the one man and his guitar tour back in February 2001 with some low-key dates in France, Belgium and Holland. For the first time in his 24 year career, Paul is playing an acoustic set which includes not only songs from his 10 year solo career but another first, he is delving into his back catalogue with some choice songs from The Jam and The Style Council. The tour built momentum taking him next to Germany, Austria, Italy and Spain and eventually to the UK to obvious adulation. Then onto Japan and the US where he hasn't played for many a year. Following the release of the record, Paul will play more dates in Germany and the UK in the build up to Christmas and will find time in between to begin recording the new studio album due for release early next year.

'Days of Speed' then, will be the document to prove beyond doubt that Paul Weller is not only the greatest songwriter of his generation but beyond. 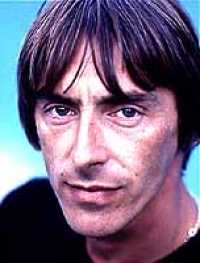