Please correct your tags to Paraziții.

Known for songs like “Bad Joke” and “Playback”, the group was subject to restrictions by the National Audiovisual Council (Romanian “Consiliul National al Audiovizualului”), due to explicit language. Television and radio stations were fined for playing some of their videos/songs and two videos were banned outright. This motivated their song “Jos cenzura!” (“Down with Censorship!”) which criticized the Social Democratic government and was released shortly before the local elections in June 2004.

Ombladon, member of the group, won the Best Romanian Act Award at the MTV Europe Music Awards in 2004 with the song “Egali din naştere” (Born Equal).

Paraziţii first performed out of Romania in 2000 by participating at the “Summer Hits” festival in Chişinău, along with the groups B.U.G. Mafia and Zdob şi Zdub.

In 2002 and 2003 the group performed in tours in Germany, Austria and the Netherlands. Due to the September 11, 2001 attacks, the group lost the opportunity to perform in a Canada-USA tour. The most important event remains the act at the Wuppertal Rap-Attack festival (2004) when Paraziţii were the only group to perform before the well known rap/hip-hop artist Grandmaster Flash.

Paraziţii are/were part of major campaigns like “Playback” / “Shoot Yourself” (2001), in which they took a firm position against lip synching, or “Instigare la cultură” (Instigation To Culture) (2004) against ignorance among Romania’s youth. 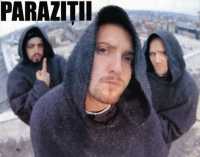