In a career that has spanned 17 years (and counting), Paradise Lost have sold a staggering two million albums worldwide. Their constant reinvention and brazen attitude to musical experimentation has always allowed them to maintain a constant relevance despite the myriad fads and short-lived scenes that have emerged over the last two decades. Indeed few bands that prove so very influential in their infancy maintain the quality of output that Paradise Lost have.

It was in 1991 (three years after the band’s formation in Halifax in 1988) that the "Gothic" album was released. This record helped form the basis of an entirely new genre, gothic metal. Even now, fifteen years later, the influence of Paradise Lost is clearly visible in bands like HIM and The Rasmus.

Since then the band - named after John Milton’s epic 1667 poem - have released a number of musical highlights and genre merging masterpieces. Instead of replicating their achievement with "Gothic", the band turned to more modern forms of heavy metal with their following two albums "Shades of God" (1992) and "Icon" (1993), their trademark melancholy still apparent.

"Draconian Times" (1995) saw the band fuse bold Gothic soundscapes with traditional metal influences leading to their most commercially successful album to date. The band’s darkwave/alternative influences were further seen on the release of 1997s "One Second" album where they experimented with electronic instruments, adding to their diverse sound.

As Paradise Lost bravely progressed further from their metal past, 1999’s album "Host" was the biggest development the band made in terms of style, steering into progressive electronics. For "Believe in Nothing" (2001), the band hired producer John Fryer (Nine Inch Nails, HIM), who gave the almost hymn like Dark Rock a painfully intense injection. That album was also the end of their dalliance with pleasant pop mannerisms and nostalgic 80’s flair.

On Paradise Lost’s last album "Symbol of Life" (2002) they returned to their early roots. Together with producer Rhys Fulber (Fear Factory, Front Line Assembly), vocalist Nick Holmes, guitarists Gregor Mackintosh and Aaron Aedy, bassist Steve Edmondson and drummer Lee Morris created an opus bursting with the power of early releases but retaining the familiar sombre sound. Paradise Lost demonstrated their expansive influences even more when the album featured their own take on Dead can Dance’s "Xavier".

Paradise Lost’s self titled tenth studio album "Paradise Lost" has come full circle. It is a red-hot return to the fray, with some of the heaviest work the band has ever done. Despite the massive interest in Paradise Lost’s musical descendants, this is not the time to be looking to second or third generation imitators. Their eponomously titled record is proof that this band is as vital, as challenging and as dynamic as ever. It is an adrenaline charged, fist shaking statement of a record.

Again recorded with duo Rhys Fulber and Greg Reely, and with drummer Jeff Singer taking the place of Lee Morris, it encapsulates a newfound maturity combined with that trademark guitar driven PL sound. 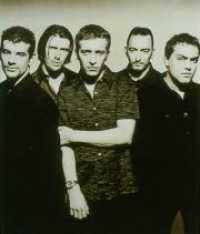