We live in times when political positions are becoming polarized and cultures are considered fenced-in entities that cannot be united. The world is often viewed through a faulty prism that divides “us” from “them.” That’s why it is such a tension-breaker when someone takes the time and uses their talent to remind us that we are all human beings. That the blood running through your veins is not significantly different from the blood that flows through your neighbor’s body, even though you may not share the same social status, political views, religious conviction or hail from the same latitude or longitude. This is where Outlandish enters the picture.

The story of Outlandish is an uplifting tale about three friends’ common adventure, which starts in the youth clubs and soccer fields of the western Copenhagen suburbs. A compelling tale of a band that has grown strong through a rare combination of hard work, friendship and the courage to explore new musical paths. At the same time, Outlandish is the story of a band that insists on the vantage point called “the world we live in,” and through subjective, grass-root musical narratives, tries make a difference. Quite a bit has happened since Lenny Martínez, Waqas Qadri and Isam Bachiri broke ground in 1997 to build Outlandish and begin a career together.

Official fusion cuisine
The first milestone along the route to today is the debut album Outland’s Official (2000), which was received with open arms by the public and the critics. “Walou,” “Wherever” and “Come On” became solid radio hits. The trio from the western suburbs reaped numerous music awards, were nominated for six Danish Music Awards and took the prize for Best Hip-Hop Album. The statuette that came with the honor stood in the homes of the band members’ respective parents, rotating from one home to another. It was, however, sporting a little top and skirt for a time because Waqas’ mother felt it was a bit risqué.

With the release of Outland’s Official Outlandish publicly unveiled a unique mode of thought and approach to creating modern music: A musical, socio-cultural melting pot heated by the hip-hop Lenny, Waqas and Isam had had a passion for since early youth. It was like a special type of fusion cuisine in which the fundamental ingredients were clearly American, but with dashes of spices that might be beats, samples and snatches of Arab pop, Bollywood soundtracks as well as Latin American rhythms. The lyrics were expressed in English, Spanish, Urdu, Arabic – and Danish. Or as Isam later painted a verbal picture: “I was in my room listening to Tupac, my mother was playing Moroccan folk music on the stereo down in the living room, and somewhere along the line the idea popped into my head, that I could unite the elements of my life in music.”

Crossing borders
The follow up, Bread & Barrels Of Water (2002), proved to be the band’s true break-through. Songs such as “Guantanamo” and “Aicha” became powerful locomotives that carried Outlandish to a position among the absolute heavyweights of Danish popular music. At the same time Outlandish indicated in Bread & Barrels Of Water that they are a band who refused to let the grass grow under their feet.

Thematically, the debut could safely be called the compilation of all the experiences posed by ethno-cultural differences during their early years, while the follow up was much more spiritual, introspective, and even the loyalty towards hip-hop -- the formative genre -- at times had to step aside for a new form of musical expression. With Bread & Barrels Of Water Outlandish took the initial steps into a world marked by a fascinating musical boldness and a personal, existential humility. This was accomplished, however, without moving away from hip-hop, nor from the self realization acquired by individuals from immigrant backgrounds.

In 2003 an international version of Bread & Barrels Of Water was released throughout most of Europe, in India, and in all of the Middle East and North Africa. So, Isam Bachiri, Lenny Martínez and Waqas Qadri – with, respectively, Moroccan, Cuban and Pakistani backgrounds – spend a longer period of time extensively touring Europe, along with numerous hops to the Middle East and India, where the album earned a gold record.

In motion
To be sure, it was a trio of well-traveled gentlemen who sat down at the studio console at the start of 2004 to begin recording a new album, now entitled Closer Than Veins. All the traveling really influenced the creation of Closer Than Veins. Waqas explains: “We were out there where things are happening. We met a big variety of different kinds of people, who live their lives in different ways, under a broad range of conditions. I believe it has helped us to see ourselves as human beings, as a part of the whole, as opposed to immigrants who are different from the world around them. It’s reflected in the way we address our lyrics and the way we make music ... “

When you hear entitled Closer Than Veins, you’ll know what he means. Outlandish has pulled out the tent stakes and moved their musical tent away from the shadow of hip-hop, where it has been until now. When you hear the 15 songs it will become clear that Outlandish is hardly stuck in a groove. The tent was deftly packed and then pitched amid all the genres and forms of expression in the world. The beauty and compelling appeal of the music bear witness to the creative self-confidence of the band members: 29-year-old Waqas, 28-year-old Isam and 30-year-old Lenny. From songs to rap and back to songs; from Outlandish’s own productions to tracks created in collaborations with other producers; from melancholy to the joys of life, as well as some social indignation – Outlandish displays more versatility than ever before. And the initial result is a fantastic third album.

Considering the quantum leaps the band has taken from album to album, it will be interesting to see how their music will leap into various areas of the world. One thing is sure: Outlandish has created its own definition of world music. And no matter how many differences there are in the world, the humble human being will be heartened, entertained and educated by listening to Outlandish. 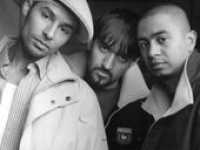