They brought you Southernplayalisticadillacmuzik, Platinum. Then they brought you ATLiens, Platinum plus. Now Big Boi and Dre, the player and the poet, bring you their highly anticipated third album, Aquemini, destined at least Double Platinum.

OutKast consistently provides superb lyrics laced over bumpin tracks which have earned them platinum albums, #1 hit singles, awards, and respect in the world of rap. In 1994 the duo entered the hip hop scene with the Organized Noize (TLC, EnVogue, Goodie Mob) produced platinum album Southernplayalisticadillacmuzik. It debuted at #3 on the R&B Billboard Chart, received a 4.5 mic rating (out of 5) from The Source Magazine, and the group received a Source Award for Best New Group or Duo. The album's first single, "Player's Ball", went gold in a matter of weeks, holding down the #1 spot on the Billboard Rap Chart for over six consecutive weeks. In short, OutKast made the industry stop and respect that rap can flow from the dirty south.

OutKast came right back with their sophomore album, ATLiens, which sold 1.5 million units. ATLiens reached platinum status within a few weeks of its release when it entered the Billboard Top 200 at #2 (directly behind Pearl Jam). The album, also produced by ONP, marked the very impressive production debut by Big Boi and Dre who crafted the first release off ATLiens, "Elevators." The single stayed at #1 for weeks, reached platinum status, and had hip hop heads across the nation chanting "Me & you, your momma and your cousin too, rollin down the strip on vogues, comin up slammin cadillac doors."

This time Big Boi and Dre have taken their craft to an even higher level producing 9 out 14 tracks on Aquemini. "It's all about growing," Big Boi explains why they took their project in their own hands. "We started producing on the second album and felt like people appreciated what we were doin' so we had to crank it up on this one." And crank it up they do. Aquemini takes you on a hip-hop, street, spiritual, and musical journey. There is something for everyone on this album which is confirmed by the variety of guests who appear on the album: Erykah Badu, George Clinton, Raekwon from the WuTang Clan, and Goodie Mob, just to name a few.

"Aquemini is the meeting of two worlds. The world of Aquarius & Gemini (Big Boi & Dre's signs respectively)," Explains Dre on the meaning of title. "It's simply that two people can come together as one and create." Hence, the playa and the poet. "Balance is key," adds Big Boi, the playa of the duo. "Balance in the music and balance with me & Dre." Just as OutKast has grown musically, so have they individually. "I'm more street, hard-core hip hop, and Dre's more extraterrestrial." Big Boi describes. The two also have very different appearances. "Dre looks like the music and I look like the message."

Although you might find the two ordering from different menus (Dre is a vegan and Big Boi is likely to be found at MoJo's Chicken Wing Shack) or going in different directions when they leave the studio, their direction in music is clear and united. "Even the sun goes down, heroes eventually die, horoscopes often lie and sometimes 'y', nothing is for sure, nothing is for certain, nothing last forever, but until they close the curtain, it's him and I, Aquemini" "On this album we wanted to excel creatively and experiment more," Big Boi explains the concept behind the album aside from dismantling rumors of an OutKast break up, "Aquemini is a balance of the heavy music on the first album and the heavy lyrical content on the second. It's our best album yet!"

With tracks like "SpottieOttieDopalicious" done with all live music comparable to "Funky Ride" on the first album, "Mamasita" which carries strong New York flavor with a southern twist, and "Da Art of Storytellin (Part 1)" that provides an upbeat smooth groove in a seventies feel, it's easy to agree this is their best album yet.

The first single, "Rosa Parks" is a "back alley, southern blue grass, hoe down jam session" describes Big Boi excitedly. The track opens up with tight head bobbin' production as Big Boi and Dre rhyme skillfully over the hype beat. Then it takes you back to everyone's southern roots with a harmonica interlude that will have you out of your seat and slappin your knee. "We are tryin to bring the good time back," says Big Boi. The unforgettable hook "Ah ha, hush that fuss, everybody move to the back of the bus, do you wanna bump and slump wit us, we the type of people make the club get crunk" is destined to keep the party going.

OutKast continues to take it to the streets with "Skew It On The Bar-B" featuring Raekwon from The WuTang Clan. Dre explains they've always admired Raekwon's lyrical style. "Big Boi met him in Lenox Mall, told him about the record and he said he wanted to get down on it." The track is laced with a hard hitting thump beat with a quick witty hook between all three verses, "Ol' School playas to new school fools, Kast keep it jumpin like Kangaroo's, Well skew it on the bar-b, we ain't trying to lose, say I be got damn it, they done changed the rules."

Of course tradition holds true on this album, it wouldn't be an OutKast record without a song with Gold labelmates Goodie Mob. Khujo, T-Mo, and Big Gipp lend their lyrics to "Ya'll Scared" as Cee-Lo, along with Erykah Badu (Dre's soul mate and mother of his 8 month old son Seven), Big Rube and Joi & Peach from the group Heroin lend their talents to the spiritual, enlightening track "Liberation." The record was so well received, "once we laid our parts down, everyone wanted to be a part of the song." So much, explains Dre, "when Erykah heard the song she wanted us to let her use it for her album."

"It was destiny for George Clinton to be on 'Synthesizer'", says Dre. "Synthesizer" is the funky, new age millennium track on "Aquemini." "George Clinton is funk," adds Big Boi, "and there's always funk in the cadillac." Other guest include Cool Breeze and Sleepy Brown from the Organized Noize camp, Backbone, and Masada, the first female to rap on an OutKast record.

Big Boi and Dre came together at Atlanta's Tri-City high school where OutKast was born. They signed a contract with LaFace Records just prior to graduation and began their exceptional career in the rap game. The depth, emotion and intricacy of OutKast's words can be partially explained in the fact that they've lived the city life since childhood. Dre (Andre Benjamin) grew up in a single parent home moving from place to place within southwest Atlanta until he was 15 and went to live with his father. It was during his adolescence that Andre fell victim to a negative lifestyle like many urban youth as a means of survival. Big Boi's (Antoine Patton) story is similar, moving from Savannah to Atlanta thirteen years ago to join Andre in the ranks of the young, gifted, black and untapped as he ran the Atlanta city streets as well.

Clearly on a changed and correct path, the duo have ventured into their own business creating Earthtone Production for which they are actively seeking new talent. In addition, Big Boi owns and runs Pitfall Kennels, a lucrative business where he breeds and sells Pitbull dogs and Dre is persuing his visual talents via painting with Andre Classic Paintings.

The playa and the poet have elevated their game for the third time with Aquemini. Musically, individually, and collectively Big Boi and Dre are coming strong and impressive with their third and possibly best effort. Dre's lyrics from the title track clearly describes the group's feelings on the music, the look, and the entire project: "Don't get caught up in the appearance, It's OutKast Aquemini, another black experience." 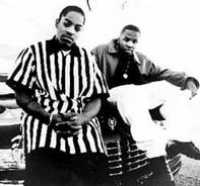