Ornella Vanoni (born September 22, 1934 in Milan) is an Italian singer.

She started her artistic career in 1960 as a theatrical actress of Bertolt Brecht works under the direction of Giorgio Strehler. At the same time, she started singing, recording for a high-class public. The folklore and popular songs she reinvented in her recordings of this period, especially ones connected with organized crime, gave her the nickname of cantante della mala (literally translated as “singer of the bad life”)

Soon after her popularity rose, thanks to the songs “Senza fine” and “Che cosa c’è” (1963) written for her by Gino Paoli. In 1964 she won the Napoli Festival with “Tu si na cosa grande”.

She subsequently took part in a series of Sanremo festivals, which resulted in great successes with the songs; “Abbracciami forte” (1965), “Io ti darò di più” (1966), “La musica è finita” (1967), “Casa bianca” (1968), and “Eternità” (1970). “Casa Bianca”, which came second, was the subject of the dispute between its author Don Backy and the Clan of Adriano Celentano because of copyright problems.

In 1999 she recorded “Alberi”, a duet sung with Enzo Gragnaniello. She was mostly active in live concerts and as a guest singer in recordings. In 2004 she released a duo album with Gino Paoli as a way of celebrating her 70th birthday.

In addition to her singing career, Ornella Vanoni was active in many other performing arts. Apart from the aforementioned theatre career, she also took part in movies, posed nude for the Italian version of Playboy Italy and also participated in television programmes such as a parody of a velina of Striscia la notizia.

The inclusion of her song “L’Appuntamento” on the Ocean’s Twelve soundtrack sparked a renewal of interest in Vanoni in the US. 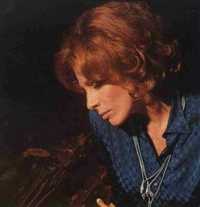