He born Orhan Kencebay on 4th August 1944 in the Turkish coastal town of Samsun. He started learning music at the age of six, taking violin and mandolin lessons from Emin Tarakci ,who was a classical musician from the Ukraine Conservatoire. At the age of seven Gencebay started playing the baglama (a traditional Turkish instrument), and continued taking traditional Turkish folk music lessons. At ten he created his first composition. At thirteen he started playing the tanbur, an instrument often used in Turkish classical music, to improve his theoretical and practical grasp of Turkish classical music.

During his high-school years he performed in classical and traditional Turkish folk music societies, playing the tambur and baglama, gave music lessons, and helped to organise community music centres in Istanbul and Samsun. From sixteen he became interested in jazz and rock music, and played tenor saxophone in wind orchestras. He entered the Turkish conservatory in Istanbul, and stayed there for four years. In the military, continued to play saxophone in the military brass band.

At twenty and twenty-two he passed the Turkish Radio and Television Corporation (TRT) exams, allowing him to become a resident baglama player at the network for several months. In 1966 he got an excellent grade in a National Baglama Contest with Arif Sağ and Çinuçen Tanrıkorur, two other contemporary masters of Turkish music.

In the late 1960s he collaborated with a wide range of musicians in performances and film music. Between 1966 and 1968 he played baglama with Arif Sag on recordings with many singers. Gencebay also worked as music director on Turkish films, and also collaborated with many musicians from different genres. He appeared as a baglama performer and composer in musical societies, besides releasing several singles of traditional Turkish music. In 1968, he released his first “free-style” single “Sensiz Bahar Gecmiyor/Basa Gelen Cekilirmis”, and was rewarded. During the 1970s he released many singles in a new genre that is a fusion of traditional Turkish folk music, Turkish classical music, Western classical music, jazz, rock, country, progressive, psychedelic, Indian, Arabic, Spanish, and Greek musical styles. Even though some musical societies such as TRT named fusion music recordings “arabesque music, Gencebay rejected the term, saying that it was inadequate to define his style.

In 1972, he founded the Kervan Record Company, which became very successful, attracting many other talented musicians. Throughout his career Gencebay has taken leading roles in thirty-six films, has been a composer in nearly ninety films, composed about a thousand works, released almost thirty-five singles, fifteen albums, and dozens of cassettes. His albums have sold over sixty million legal copies 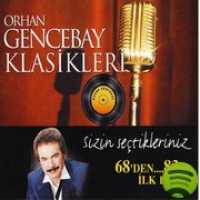