There’s no doubting the ripple effect caused by the phenomenal success stories of newly-minted solo chart-toppers like Beyonce’ and Justin. Next up to the plate is Omarion, who is primed to make his presence felt as he crafts a rhythm all his own. After making his mark as the lead singer of R&B’s multi-platinum quartet, B2K, Omarion now offers a glimpse into who he is today as a young man, first, and also as an artist with a solo debut, entitled, simply, O.

The album is packed with equal doses of ballads and mid-tempos and allows listeners to peep his flavor. “My dad hipped me to the music of Marvin Gaye and Earth, Wind & Fire, so the album reflects the music that I’ve been listening to all my life – it’s a little old school mixed in with the new.”

For his debut, Omarion stepped into the booth with producers including AllStar (3LW, Joe, Luther Vandross), The Underdogs (B2K, Ruben Studdard, Tyrese) and Atlanta’s own Corner Boys (Usher). As co-writer on 5 songs, he hopes to show fans “a deeper insight of what goes on inside my head,” he adds. “Love is always the topic.”

In the case of the first single/title track, the letter O has multiple connotations. Not only is it the first letter of his name, but it also refers to the “overtime” he’s willing to put in to appease the ladies. The silky ballad is far from subtle in its promises of physical and emotional satisfaction. “’O’ is my favorite song on the album because it explains who I am – it’s real grown man,” he laughs.

“Never Gonna Let You Go (She’s a Keepa)” is a funky, flirty song about the thrill of finding “the one” and features a few, choice verses from Big Boi, the lone guest to appear on the album. “When you find a girl who you like and she has all of the qualities that you want, she’s a keeper – bottom line,” Omarion says. Then on the flip side, he voices conflicted emotions about his girl with “I Wish.” Everyone will be able to relate to his anguish by the time he reaches the chorus – “I know it’s crazy, but I wish I didn’t love you…but I’m glad I do.”

At twenty years of age, Omarion is learning to appreciate the unpredictable and ever-changing rhythm of relationships, which he reveals on “I’m Gonna Change,” a heartfelt ballad with plenty of bounce appeal. “Relationships are up and down,” he admits, “and there always comes a point where someone will say, ‘Baby, I’m gonna change.’”

Born and raised in California – Inglewood, to be exact – Omarion began his creative journey doing commercials prior to joining B2K at the age of 15. No sooner than they hit the scene with their self-titled debut, the group’s first single, “Uh Huh,” landed at #1. Next came the hit single, “Gots Ta Be,” and the release of their sophomore disc, pandemonium! which included the chart-topping banger, “Bump, Bump, Bump (featuring P. Diddy)” and “Girlfriend.” The group captured crossover appeal, an entire generation of loyal fans and even a coveted co-headlining slot on the now-infamous “Scream” Tours. Along with earning nominations for MTV Video Music and American Music Awards, they were voted Best Group by VIBE and took home both a Billboard Music Award (for biggest-selling single) and BET Viewer’s Choice Award. "There is a greater responsibility with being a solo artist than when you’re part of a group,” he says of being on his own. “You can’t switch it up or take a breath because all of the focus in on you. It’s a lot of work.”

With two platinum albums, a Christmas collection and Greatest Hits compilation under his belt, Omarion’s resume has since expanded to include roles on television and film as well as the title of author. He’s made primetime appearances on One on One and The Bernie Mac Show, did his thing on the big screen in the blockbuster film and soundtrack, You Got Served, will appear in the in-the-works sequel and has completed work on the much-anticipated film adaptation of the ‘70’s cartoon, Fat Albert. Then there’s the autobiography that’s full of professional highlights and personal anecdotes. Of his forthcoming memoir, he insists, “There’s a lot about me that my fans don’t know. I’ve been singing and dancing since I was 5 years old and have made a lot of sacrifices. You don’t live a normal life when you’re in the limelight.”

Looking toward the future, Omarion envisions his multi-layered career in terms of chapters of a never-ending story that includes songwriting, producing, acting and an openness to explore anything else that his schedule permits. When asked what music means to him, he responds without hesitation, “Music is everything – it’s my world, my life. I know that I can’t visit each of my fans personally, but I hope that my music makes them feel like they’ve gotten to know me. I’ve put my heart into this album.” 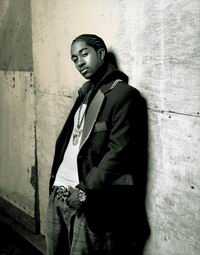