When Omar Cruz surveyed the music scene in early 2005, the Los Angeles-based rapper noticed a distinct void. “…There are no Latins, no Mexicans rapping. We’ve been overlooked,” observed Cruz. He wanted to change that. “I’m an MC, but I happen to be Latino. I’m trying to bring to the forefront our lifestyle out here.” Now signed with Interscope/Geffen records, Cruz is in a position to do just that.

Growing up in Los Angeles, Cruz was exposed to both the music of his parents’ native lands and the rap that was exploding throughout the streets of Los Angeles. He first became infatuated with music at 10-years-old when his father gave him a Star Studio system for Christmas. The duel cassette, mic and headphone combination was enough to transform him into a music fiend. “When I got my first mike, I couldn’t let go of it,” he recalls. “I had a love affair with hip-hop and the mic. It became second-nature for me.”

He idolized Big Daddy Kane, N.W.A., Rakim and the Beastie Boys as a youngster. Eventually he tried his hand as a breaker, then a DJ, before putting his focus into being a rapper. While in high school, he was a member of the Degenerates and eventually became a mainstay at Los Angeles’ famed underground hotbed, the Goodlife.

Initially, his parents, particularly his father, did not approve of rap or hip-hop. “He didn’t understand,” explains Cruz. “He only saw the negative side of rap music.” Cruz tells the story when his father discovered him coping down lyrics to NWA’s “Dopeman” and broke his cassette—Cruz’s favorite—and washed his mouth out with soap. Years later, as Cruz has proven himself a formidable and talented artist, his father has come around. “He and my mother both fully support me now,” Cruz says.

Cruz originally took the rap name Omar Cruz (his first name and his maternal grandmother’s name) so that he could give a more personal approach to his music, which he hopes to use as a vehicle to explain Latinos’ place in hip-hop culture.

“I’m not going to wait around for anyone to tell us our stories or represent us,” he says. “Everyone knows that we’re been a part of this culture with the lowriders, the gang cultures, the Chicano culture. Everyone knows that we steal from each because the black and the Latinos, we’re all from the same hoods and live in the same neighborhoods.”

When Cruz decided to pursue the music scene, he had very specific goals. “I felt that if people were flooding the streets with new music every two weeks, I would concentrate on one CD that’s a culmination of everything,” he explains. “It’s quality over quantity.”

Cruz was introduced to Estevan Oriol, a well-known photographer, and Mister Cartoon, a prolific tattoo artist, who immediately took an interest. “They’ve seen my ascent into the [rap] game, and when they felt the moment was right, the co-signed [my career].” Cruz explains that his two mentors had been peripherally involved in the careers of others, but felt Cruz had so much promise that they wanted to fully endorse him. “I respect them as successful Latinos in the business world, but also as big brothers. They have always been there to guide me and I am so grateful to them.”

Cruz’s subsequent mixtape was City of Gods, inspired by both the acclaimed Brazilian movie of the same name and the Los Angeles’ perpetually turbulent streets. With trailblazing, Latin-inspired production and innovative song concepts, City of Gods (released by BYI Entertainment) became the hottest mixtape on the West Coast. On the searing 22-cut collection, Cruz imagined himself meeting the late Big Pun (“A Visit From Pun”), highlighted the struggle of Latino immigrants in Los Angeles (“Step N 2 The Sun Pt. 2 (Libertad!)” and documented his career as one of LA’s most respected underground rappers (“Forsaken…A West Side Story”).

City of Gods spread like wildfire, first throughout Los Angeles and eventually throughout the West Coast. By presenting a different side of Los Angeles, Omar Cruz had, through one mixtape, established himself as the new voice of the streets. With his buzz building in the streets as well as the music industry, Cruz is hard at work on his debut album, which is scheduled for an early 2007 release.

Now, as his name bubbles in the underground, his appearances on high-profile remixes becomes more common and he works on his major-label debut album, Omar Cruz has claimed a special spot in the rap world. “What haven’t you heard from the West, from LA?” Cruz asks. “Me. You haven’t heard my perspective. You don’t know nothing about us. You see us when you come out here. Pac mentioned us. ‘It wouldn’t be LA without Mexicans.’ Thank you, Pac. Let me take it from here.”

Several record companies recognized Cruz’s fresh music and a bidding war ensued. Cruz and BYI Entertainment decided to sign with industry heavyweight Interscope/Geffen Records, also home to Snoop Dogg and Mary J. Blige, among others. “They could see our movement,” Cruz says of Geffen. “We had our own street teams that would be holding pickets signs after big shows and big clubs in LA. We were hitting the streets and people were talking about it. That energy got people interested in us.”

Cruz plans to infuse his album with the same lyrical insight and sonic force that made City of Gods and Blow two of the century’s hottest mixtapes. “An album is like a book,” he says. “I think you’re selling yourself short as an artist by trying to please people that are going to clubs. I miss those Illmatic days, when people poured themselves into an album. Now, they’re just trying to have that one hit single. I understand that everybody needs a hit, but it’s almost a lost art to say, ‘Let’s do songs that we’re going to remember for what we are going through at the time.’ It’s a mandatory thing for me.”

In the future, Cruz plans to “definitely make history” and become “not just the greatest Latin rapper, but the best MC period. I want to open doors for artists the way artists have opened doors for me.” His determination and talent is sure to help him achieve his goal of increasing the numbers of Latinos in entertainment, recognizing that “this is the time.” Finally, he recognizes, “What’s the point of all this if I can’t help someone else out?” 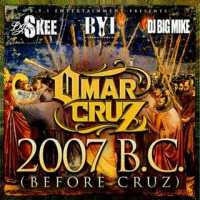