Olivia Newton John was Born in Cambridge, England in 1948, she was the youngest child of a Professor named Brin Newton-John and her German born mother Irene daughter of Nobel Prize winning physicist Max Born. Despite the academic background Olivia only had an interest for music and singing.

At the age of 5 years old Olivia moved to Melbourne, Australia with her family. When she was 15 she started an all-girl group called Sol Four. Later that year she entered a poplular talent quest tv show called "Sing, Sing, Sing" hosted by Johnny O'Keefe, winning this contest she earned herself a trip to London. By 1963, Olivia Newton John was appearing on the local daytime TV shows and weekly pop programs in Australia.

Olivia met her lifelong friends, Melbourne born Pat Carroll and John Farrar on the "Go Show". The following year she went to London, where she was joined by her friend Pat (who later married John Farrar). They toured Europe as a duo act, they appeared on BBC television and the cabaret circuit and played in nightclubs and American service bases until Pat's visa ran out so she had to return to Australia. Breaking the duo up and leaving Olivia to make her first single with Decca Records in 1966, a version of Jackie DeShannon's "Till You Say You'll Be Mine." In 1971, Bruce Welch of The Shadows co-produced her cover of Bob Dylan's "If Not For You," with her Australian friend, producer/songwriter, John Farrar, who she continues to collaborate with today.

"Let Me Be There" her debut U.S album in 1973 on MCA Records produced her first top ten single of the same name, Tthe Academy Of Country Music honored Oliva as the Most Promising Female Vocalist and a Grammy Award as Best Country Vocalist.

Just before she moved to the United States to build upon her burgeoning success there, Olivia represented the UK in the Eurovision Song Contest in 1974. The number she sang, which was selected by a poll of TV viewers, was a terrible song called "Long Live Love", and together with a long flowing baby-blue dress, turned out to be a disaster. Olivia was up against stiff competition, as ABBA stole the show with a barnstorming performance of their song "Waterloo", which launched their international career. Olivia came in a distant fourth.

Olivia left England for America in 1975 to promote her next album "Have You Never Been Mellow". The title song charted at #1 and her next single from the album, "Please Mr Please", reached #3. This was the start of a long list of hits which continued throughout the 70s. Olivia became a regular on the TV show "Midnight Special", and in 1976 she had her own TV special on ABC called "A Very Special Olivia Newton -John".

Soft ballads were Olivia's strong suit, and she rattled off a string of albums, including, "Clearly Love", "Come On Over", "Don't Stop Believin", and "Making A Good Thing Better". She toured Japan in 1976 and a concert was recorded as a live album titled "Love Performance".

This proved to be only the beginning of a very exciting career. Her countless successes include three more Grammys, numerous Country Music Awards, American Music Awards and Peoples Choice Awards, five #1 hits including “Physical,” which topped the charts for ten consecutive weeks, and 15 top 10 singles. In 1978, her co-starring role with John Travolta in “Grease” catapulted Olivia into super-stardom. This film led to the production of the most successful movie musical soundtrack in history, featuring the duets "You're The One That I Want" and "Summer Nights," with Travolta, as well as her mega-hit, "Hopelessly Devoted To You." The film was re-released worldwide in 1998 in celebration of it's 20th anniversary to even more acclaim, a true testament to it's timeless quality. Her other film credits include "Xanadu," "Two Of A Kind," "It's My Party,” and recently the independent feature, “Sordid Lives.” She followed that success, by co-starring with her daughter, Chloe, in the Showtime movie, “The Wilde Girls.” Clearly following in her mother's footsteps, Chloe has performed on stage with Olivia during her last two tours.

Olivia's public appeal has proved to be equally timeless. Her career has spanned more than three decades and she is still a vibrant, creative individual that is adored by fans across the world. Throughout her career, the much-loved star, who danced with Gene Kelly in “Xanadu,” hosted the popular internationally syndicated “Wild Life” television show, was bestowed an O.B.E. (Order Of The British Empire) by Queen Elizabeth in 1979, has held many humanitarian causes close to her heart, particularly since the birth of her daughter Chloe in 1986. She served as Goodwill Ambassador to the United Nations Environment Programme and in 1991, the Colette Chuda Environmental Fund/CHEC (Children's Health Environ-mental Coalition) was founded after the tragic death of Chloe's best friend from a rare childhood cancer, with Olivia serving as National Spokesperson for ten years. Her steadfast devotion and shared commitment to CHEC's mission and goals enabled the organization to receive worldwide attention and support.

Her charmed life has not been without it's share of upset. In the 90's, Olivia successfully overcame her own battle with breast cancer, which inspired her self-penned and produced album, “GAIA,” her most personal album reflecting upon her experiences with cancer. She used these experiences to gain greater self-awareness and became a positive inspiration to millions of people battling cancer. As a breast cancer survivor, Olivia has become increasingly well known and respected for talking openly about her battle with breast cancer and for promoting public awareness of the importance of early detection. Her personal victory against cancer led her to announce her partnership with the Austin & Repatriation Medical Centre and the creation of the “Olivia Newton-John Cancer Centre” (ONJCC) on the Austin Campus in her hometown, Melbourne, Australia. The ONJCC will provide a comprehensive range of services and facilities for cancer treatment, education, training and research. Olivia continues to give back to the community generously and has been acknowledged many times by charitable and environmental organizations for her ongoing efforts, among them: the American Red Cross, the Environmental Media Association, the Women's Guild of Cedar's Sinai Medical Center, the Rainforest Alliance and Concept Cure.

In 1999, with the release of her album, "Back With A Heart," Olivia garnered an Emmy Award for her songwriting and returned to work as a performer touring extensively in the United States for the first time in seventeen years. In the new millennium, her international recognition has continued to grow. She was invited by the Vatican on behalf of Pope John Paul II to perform at the Jubilee Celebration for the Sick and Healthcare Workers. Olivia was thrilled to sing the duet, “Dare to Dream” with fellow Australian John Farnham at the Opening Ceremony of the Sydney 2000 Olympics to an estimated global viewing audience of four billion people. Adding to this Olympic experience is what Olivia feels is one of her most memorable moments - the honor of carrying the Olympic Torch and then passing it to tennis legend, Pat Rafter, on the steps of the Sydney Opera House, during the Olympic Torch Relay.

In 2000/2001, Olivia released her only live album, "One Woman's Live Journey," followed by “Magic - The Very Best of Olivia Newton-John,” which celebrated thirty years of recording. And if that wasn't enough, she also released her first holiday album, “The Christmas Collection.” In 2002, Olivia was inducted into the prestigious Australian Music Hall Of Fame at the 16th Annual Aria Awards. Her passion for Australia was proven once again when Olivia recently reunited with friend and business partner Pat Farrar to launch their distinctly Australian wines under the iconic homegrown brand Koala Blue, to proudly bring the “taste of Australia” to the rest of the world. Her current cd, simply titled, “2,” was recorded in 2002 in Australia and features a host of talented Ozzies along with a couple of her american friends (honorary Ozzies!) and is quickly garnering international acclaim. With her current international tour, ongoing projects and philanthropic endeavors, Olivia's worldwide popularity is as strong as ever! 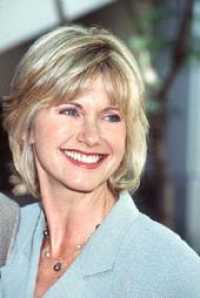