To Whom It May Concern

The following is an account of the making of the new Old 97’s album, Satellite Rides. The Elektra Entertainment Group commissioned this report, and the 97’s singer/front man/principal-songwriter Rhett composed it. Hi.

I’m tempted to tell you how good our new record is, but that sort of thing is hard to communicate – like describing a card trick. I will instead tell you WHY it is so good.

In early 2000 it came time to get to work on what would become Satellite Rides. I thought about it and realized that the Old 97’s function best in close proximity. Four interdependent pieces of a larger whole. For example, when we first formed the band three members lived in the same apartment building. When we made our second album (1995’s Wreck Your Life), we slept on the floor of an attic recording studio in Chicago’s Wicker Park.. Our best music is bred by living like a litter of puppies, all over each other.

On the other hand, Fight Songs (our 1999 record, and second Elektra release) was a geographical nightmare. By then, we lived apart – the band in one city and me in another. During the pre-production for that album, I flew to Texas one week a month for two months in order to rehearse with the guys. That’s a sum total of a mere two weeks preparation. And, we’re slow-learners! I’m proud of Fight Songs, but it was a hard record to make.

So for Satellite Rides I came home to Texas. Abandoning LA for the spring. The idea was to be intimate enough with these songs to cut them live if we so fancied. To achieve that level of comfort we spent three months working. Working! Everyday. Like regular working stooges. Granted we took long lunches and left early sometimes, but come on… We started in Ken’s guest bedroom with acoustic guitars and Philip playing drums on a cardboard box.. We wound up at Universal Rehearsal, punching the clock like we had years before in my mom’s garage. I’d already lived most of these songs while writing them, and I needed the guys to love them and believe in them also. It was easy to get excited about the great tunes Murry brought to the table. “Can’t Get A Line” was the highlight of every rehearsal for me – there is no song that is more fun to play (it’s in C if you want to try it at home). Our spring was spent in a fugue-state. Mantra-like repetition of these songs (“Rollerskate Skinny”, “King Of
All The World”, “Designs On You”, “Up The Devil’s Pay”, “Nervous Guy”, etc. ad infinitum) until we lived inside of them – we are after all very much a live band.

In August we disappeared into the Texas hill country. Willie Nelson’s studio outside Austin. Unfortunately Willie (whom we all count among our heroes) was out of town for the duration of our stay – probably not a bad thing since the “Oh-my-god-Willie-is-in-the-next-room” factor could have wrecked the whole session. His recording studio suited our needs perfectly, set as it is atop a hill overlooking the studio’s two swimming pools and below, Lake Travis. I was born in Austin, and we’ve all lived there at various times in our lives, so we truly felt at home.

We invited Wally Gagel who’d produced our Elektra debut Too Far To Care and is, like me, a transplanted Angeleno (though he is native to Boston). Also from the LA area we recruited the freakishly-nimble-fingered engineer Robert Carranza. And we started laying tape. Even though I caught myself knocking wood 50 times a day, I had no doubt these sessions would yield the best Old 97’s album yet.

The daily regimen consisted of some music, a lot of swimming, an hour or so of sloppily but heartily played tennis, shooting a BB gun at some cans we hung in a copse of trees, and at least a quarter hour counting falling stars at the end of the night just to wind down. At the risk of mixing metaphors, I must tell you that this litter of puppies was in hog heaven.

When the grueling experience of recording was over, we took the tapes to the Sunset Sound Factory in Los Angeles where Tchad Blake performs his particular brand of magic. He panned left. He tweaked right. He did a little dance in his chair. He mixed the album. Mixed it up good. Somehow made it squishy and warm and at the same time architecturally precise. This man’s genius is his intuition and it was a joy to listen to him assemble our Satellite Rides.

Hooray for the Old 97’s! I’m proud of us. Why is Satellite Rides so good? It’s simple. We took a batch of killer songs and played the hell out of them. What more can you ask of a rock band? 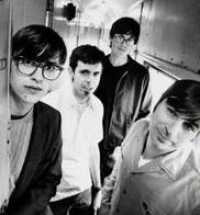