The group entitled O-Town, short for Orlando town, was created by the same guy who brought you the Backstreet Boys, and Nsync. Lou Pearlman had this wacky idea to hold auditions in several different locations nationwide, in order to create the next "boy band" of pop music. On the hit TV show "Making the Band," on ABC, this is were many guys dreams hoped to become realities. Many guys tried out and they finally narrowed it down to eight guys. (Bryan Chan, Jacob Underwood, Ashley Angel, Mike Miller, Ikaika Kahaono, Erik Estrada, Trevor Penick, and Paul Martin.) These eight worked even harder, and they cut it down again to the "final five." (Jacob Underwood, Ashley Angel, Erik Estrada, Trevor Penick, and Ikaika Kahaono.) They recorded two songs entitled, "All for love," and "Baby I would."

Once the one member, Ikaika, left the band, because of family troubles, O-Town was in a bit of trouble. They only had four members, and they really couldn't do it alone, because they needed an extra voice. This is when the group decided to bring in the talents of Daniel Miller. It was up to the chorographers, and music people to decide if Dan would be in. After a few days, Dan was declared the newest member of the group.Ever since then, they have been hard at work. They've been under a lot of pressure to make deadlines, and to show, that they can make it in this hard business. And I think they are doing a fine job. Now with the new realase of their new album, entitled, "O-Town", they will let the whole world listen to and appreciate the hard work and dedication these boys put into their music. And it shows because within the first week it was realesed it sold 144,529 copies. Not to bad for a brand new group.

The band entitled O-Town are back with a hot new album called 'O2' which stands for O-Town 2. They have took time out of releasing singles over the year (2002) to create a hot new album for the fans. For this album they got the chance to write songs for the album. Ashley co wrote quite a few songs that made it onto the album, and there is also a song writen and produced by Nelly. As some of you might think Nsync worked with Nelly First you are sadly mistaken because O-Town did. Ever since the days of Making The Band O-Town have just gotten bigger by the minute, and they are back for 2003 with a hot new album 'O2' and they are well on there way getting ready to release the first single from 'O2' in the UK any getting ready to get started on there second single which at the moment is known to be called 'I Showed Her'. Watch out because O-Town are going to be taking the world by storm in 2003. 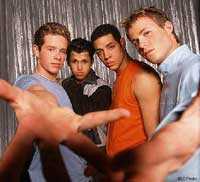