Born Fernando Sierra in Carolina, Puerto Rico. Fernando goes by his stage name “Jory” where he grew up in Torres de Sabana. Fernando L. González, who goes by the stage name “Nova” was born in Ponce, Puerto Rico, and raised in Santa Isabel and Peñuelas. They where never friends in Puerto Rico and met later on in another state.

Ever since Jory could remember his life long dream was to become a music artist. It wasn’t until he was 10 years of age when his family left for America. Just like his friend and music partner Nova who is 5 years older than him also moved to the America with the same dreams of becoming famous. Before Jovy and Nova got famous they used to preform at talent shows, concerts and on T.V just to get there name out there. As time went on so did Nova y Jory love for the music.

It wasn’t until 2003 when both came together to do a song. All it took was to do one song and it was magic from that point on. The management and producers all thought it would be a great idea if they teamed up to be a reggaeton duo. There first mix tape to have come out was called “Por Encima” back in 2004. At the time Jory was able to help out other famous Reggaeton artist such as Wisin y Yandlel and Nejo y Dalmata by bringing his talent to the table.

It was until 2007 when Jory and Nova made the move to go back to their home land and team up with Bad Entertainment record label. The record company thought it would be a great idea for them to stay focused just on the music aspect alone to become what they are today.

Once the name Nova y Jory was out on the streets artist like Franco “El Gorilla”, Zion, Skyo started jumping on the band wagon. The song that did it was “Perfume” with Yaga and Mackie that people started to trust these guys that they would be around for a while. Now in 2009 and working hard in the studio with “Black Jack Music” they now had the ability to team up with the #1 guys in the Reggaeton music industry, Trebol Clan, Nengo Flow and J. Alvarez.

Nova y Jory right now are one of the hottest Reggaeton duels of 2010 and there success seems to be just going up every year. They have managed to work very well together and have a great name in the industry. Now under new management they have been able to come out with hit song after hit song that you would hear of famous radio station Reggaeton 94. 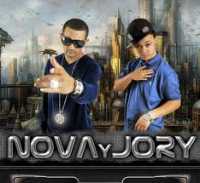