You already know what it is. From the way he greets you, to the words that he speaks. The uniform he wears is bold, aggressive and absolutely intimidating. He’s authentic – the offspring of the West Coast’s most celebrated talent – yet and still a novelty all his own. In an industry that’s fallen victim to bubble gum lyrics and erroneous dance fads to match, he’s the spokesperson the block wants for. He’s the sociopolitical outrage of Ice Cube and N.W.A. He’s Snoop Dogg before you knew his name and Ice T after an unexpected knock at 6 o’clock in the morning. He’s the very definition of Slauson & Crenshaw – a self-inspired movement and a name you can trust. He is Nipsey Hussle.

Nipsey Hussle emerged from the streets of Los Angeles and as the first signee to the Cinematic/ Epic Records joint venture, is effectively building momentum as a rising emcee while sacrificing the only way of life he’s ever known. “I try to keep a balance with my career and who I am aside from that,” says Nipsey. “It’s kinda hard, but I try to stay the same and balance both worlds. You don’t wanna forget where you come from and at the same time, you don’t wanna miss your blessing tryna live the same lifestyle you been livin’.” All in anticipation of a fall ‘09 debut, his street singles “They Roll” and “Bullets Ain’t Got No Name,” both featuring The GAME, are lyrical proof that Nipsey Hussle is here to stay. In addition to the GAME, the album is slated to feature the likes of Snoop Dogg, Sean Kingston, Lloyd and Nipsey Hussle’s own Slauson Boyz . South Central State of Mind is a healthy dose of honesty, reality and life from an authentic perspective.

“The perspective from LA is from Snoop and Ice Cube and them,” Nipsey says. “Them dudes is grown. They did they stuff, but they out of that element now. They on some other shit. So it’s like people want to hear what’s going on in the streets [now] and that’s what I’m providing with this record.” Admittedly a creative spirit born to unceremonious circumstances, Nipsey Hussle earned his moniker by absorbing all the hood had to offer and profiting from it tenfold. It was his sense of urgency that kept him alive and well. By the time he was 13 he had learned all the inner workings of a production studio and traveled daily to the Watts Towers Studio to perfect his engineering interests. His childhood innocence, however, didn’t last long and he was eventually forced to fend for himself. “When I came into my manhood and I had to make real decisions,” Nipsey remembers. “That’s when I fell real heavily into the bangin’ and the hustlin’ and the streets, and was doin’ everything under the sun. That’s when I said, ‘Forget the music.’”

Nipsey yielded to the trappings of the hood, becoming every bit the ghetto celebrity. He set up shop, opening up a clothing store in South Central and imposed his will on the streets. His lifelong passion however, wouldn’t let go. So, without the benefit of knowing whether or not his artistic career would flourish, he took a chance and sold all his material possessions. From cars to $20k worth of jewelry, rims and more, Nipsey submitted to music and invested in a studio of his own.

He recorded his first mixtape, Slauson Boy, Volume 1 and subsequently incorporated Slauson Boy Records. Various performances, including the famed House of Blues would follow, as did major radio/street promotion and a blazing hot record, “Bullets Ain’t Got No Name.” His interest in the fortunes of the streets though, refused to cooperate. “It was like, I kept going back,” he remembers. “I would go to the studio for a couple of months and then I’d go back to the streets.” 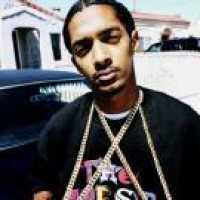