Nightcore are Thomas S. Nilsen and Steffen Ojala Søderholm from Norway, Alta. Mixing techno/dance music into faster and more happier sounds, their name, ‘Nightcore’, means that they are the core of the night, so listeners will dance all night long.
They first started making music with Dance eJay 2/3 for a school project; they got a 4+ on our first single, and 6 on the whole album, called ‘Energized’.
After this, they understood that they couldn’t come far with making music in Dance eJay so they began mixing music with their own personal, top secret program. Their next album was called ‘Summer Edition’. It was played in many CD-players in their hometown.
‘L’hiver’ is Their 3rd. album, French for winter. Then came ‘Sensaciòn’, Spanish for feeling. The goal was to make this the better one. After just 5 days the album has reached whole Finnmark, with big success. 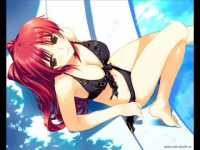