After goth pioneers the Birthday Party called it quits in 1983, singer/songwriter Nick Cave assembled the Bad Seeds, a post-punk supergroup featuring former Birthday Party guitarist Mick Harvey on drums, ex-Magazine bassist Barry Adamson, and Einstürzende Neubauten guitarist Blixa Bargeld. With the Bad Seeds, Cave continued to explore his obsessions with religion, death, love, America, and violence with a bizarre, sometimes self-consciously eclectic hybrid of blues, gospel, rock, and arty post-punk, although in a more subdued fashion than his work with the Birthday Party. Cave also allowed his literary aspirations to come to the forefront; the lyrics are narrative prose, heavy on literary allusions and myth-making, and take some inspiration from Leonard Cohen. Cave's gloomy lyrics, dark musical arrangements, and deep baritone voice recall the albums of Scott Walker, who also obsessed over death and love with a frightening passion. However, Cave brings a hefty amount of post-punk experimentalism to Walker's epic dark pop.

Cave released his first album with the Bad Seeds, From Her to Eternity, in 1984, which contained a noteworthy cover of Elvis Presley's "In the Ghetto," foreshadowing much of Cave's style and subject matter on the follow-up The Firstborn Is Dead. Kicking Against the Pricks, an all-covers album, broke the band in England with the help of "The Singer," which hit number one on the U.K. independent charts. The album also strengthened Cave's reputation as an original interpreter and a vocal stylist of note. Following 1986's Your Funeral...My Trial, Cave took a two-year hiatus from recording, partially to appear in Wim Wenders' 1987 film Wings of Desire, and then returned with Tender Prey, which featured Cramps guitarist Kid Congo Powers and Cave's strongest vocal performance up to that point.

Cave's productivity picked up immensely over the next two years after he kicked a heroin habit. He had two books (1988's -King Ink, a collection of lyrics, plays, and prose, and 1989's -And the Ass Saw the Angel, a novel) published; appeared in the 1989 Australian film Ghosts...of the Civil Dead as a prisoner; recorded a soundtrack to the film with Harvey and Bargeld; and released 1990's The Good Son, his most relaxed, quiet album. Cave received his due as one of the leading figures in alternative rock when he was invited to perform on the 1994 edition of the Lollapalooza tour to promote his Let Love In album. Early in 1996, he released Murder Ballads, a collection of songs about murder. Murder Ballads became Cave's most commercially successful album to date, and, with typical perversity, he followed it with the introspective and personal The Boatman's Call in early 1997. A spoken word release, Secret Life of the Love Song, followed in 1999.

Two years later, a rejuvenated Cave teamed up with the Bad Seeds once again for the piano-laden No More Shall We Part. Nocturama was released in 2003, and the double-album Abattoir Blues/The Lyre of Orpheus followed by the end of 2004. After touring in support of the album throughout 2005, Cave embarked on a new project called Grinderman with Bad Seeds members Warren Ellis, Martyn Casey, and Jim Sclavunos. The group's self-titled debut was released in 2007, the same year Cave was inducted into Australia's ARIA Hall of Fame. In 2008, Nick Cave & the Bad Seeds released Dig!!! Lazarus Dig!!! Stephen Thomas Erlewine & Steve Huey, Rovi 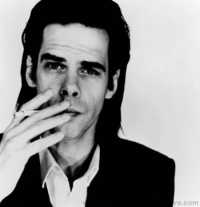