What’s that sound? It’s acoustic guitar like we’ve never heard it before. It’s things done to six strings that will boggle the ears and eyes. It’s a throaty but gentle blues croon that speaks of backwoods, beaches and the badlands of, ah, Surrey. It’s tunes, the likes of which have become a word-of-myspace cult across the Cornwall surf scene and landed prestigious support slots with Jack Johnson’s cult buddy Donavon Frankenreiter.

It’s a genius cover of Massive Attack’s Teardrop dropped into a set to silence a rowdy crowd whilst supporting Paulo Nutini during the World Cup or the Python-esque wit with which Newton Faulkner is fast winning over audiences across the UK.

It’s this inventiveness – this esprit de gig – that made this 21-year-old from just outside London one of the most buzzed-about DIY artists of 2006. With no promotion and bugger-all money his first release, last spring’s Full Fat EP, reached Number One on Amazon’s singles chart. The shuffling beats; Faulkner’s laidback scat singing and gutsy holler; the chewy blues riffs; the ‘tapping’ of strings – these had (pardon the pun) struck a chord with anyone who had stumbled across his shows in the south-west, causing the low-key release to sell-out its 3000 copies. With his wonderfully dexterous approach to guitar, Faulkner is as exciting to watch as he is to hear. 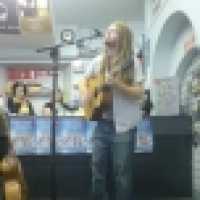