Christofer Drew Ingle began his ventures with NeverShoutNever! in September of 2007. Using the internet, and specifically myspace, he has built his career and established a solid fanbase. Chris has no record label and is in complete control of all aspects of his music. He released is first EP, “Demo-schmemo” on February 29, 2008 and his second, more popular EP, “The Yippee EP” on September 25, 2008.

Chris began music very casually. His father had a guitar lying around, and he picked it up and began to play with help from a friend in his early teen years. His parents bout him a Macintosh computer for Christmas one year that had sound-editing software on it, and his rise to stardom began then and there. In middle school, Chris went through a self-described “emo stage” where he began to like bands like Dashboard Confessional. He often speaks of his admiration for Jack Johnson. These people are who he sites as his musical influences.

On July 29, 2008, he was featured on TRL, where he performed his single “Bigcitydreams”. This was the first big thing to happen in Chris’ career to date. Not long after he began booking tours such as the Make Like A Leaf and Fall Tour with Danger Radio among others. his song “BigCityDreams” even reached #3 on the Hot 100 Singles chart which is an amazing feat for an artist with absolutely no label backing.

Great things are happening for Christofer Drew, and I don’t see his musical career ending any time soon. 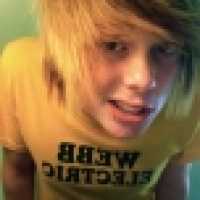