Their songs transcend time. Matthew and Gunnar Nelson, revered for unforgettable past hits, explore fresh creative territory in the present. Magically melodic songwriting and soaring sibling harmonies ensure that this pair will be a vital part of the music scene's future.

Their famed blond locks have been shortened, but their appeal is proving greater than ever. The twin sons of rock 'n' roll icon Rick Nelson have been honing their sound in Nashville, woodshedding with some of Music City USA's best songwriters.

The resultant material is mature, yet youthfully exuberant. It meshes the power pop that launched them to multi-platinum status, the country rock their father pioneered, and the common touch that has always been at the root of country music's appeal. It's rockabilly for the 21st century.

"We call it Extreme Country," Gunnar says of The Nelsons' sound. "It sounds like The Judds having sex with Def Leppard. It's basically the best of the old and the new. We feel so confident with this new sound that it's starting to feel like it did just before the 'After the Rain' record was put together."

"After the Rain" was the hit debut album by Nelson, the band Matthew and Gunnar led in the early 1990s. They zoomed to number one with "(I Can't Live Without Your) Love and Affection," had three Top 10 singles, four #1 MTV videos, and became massively popular overseas.

Every magazine from Rolling Stone to People did feature stories, and the twins performed on television shows like "Late Night With David Letterman" and "Saturday Night Live." Critics tended to unfairly overlook Nelson, however, because of the brothers' pin-up image.

With the rise of grunge rock in the mid-90s, pop music grew dark and foreboding. Matthew and Gunnar chose not to compromise their positive, drug-free posture to suit the trend. Those who continued to follow the brothers' musical progress were rewarded with numerous gems on their
seven subsequent albums.

Matthew and Gunnar have rare insights into what it takes to earn longevity in the entertainment world. They continue the inspiring story of a most remarkable show business family. Their grandparents, Ozzie and Harriet Nelson, achieved immortality with "The Adventures of Ozzie and Harriet,"
one of television's longest-running series. Earlier, the couple had enjoyed big band success.

Rick Nelson emerged from the series' popularity to establish himself as one of the most important rock artists of the '50s and '60s. So, with Matthew and Gunnar's (I Can't Live Without Your) Love and Affection, the Nelsons landed in the Guinness Book of World Records as the only family to reach number one record status in three successive generations.

The world maintains its fascination with the Nelsons. The A&E channel's "Biography" installment dealing with the family remains one of that show's top rated episodes

Now billed as The Nelsons, Matthew and Gunnar continue to perform sold-out shows around the globe. Contributing to their audience's extraordinary devotion is the fact that Matthew and Gunnar tirelessly try to please. They take time to meet and greet each and every fan following all performances.

Due to unending requests, they've worked some Rick Nelson classics into their set. They perform them with respect and enthusiasm. "We figured it's up to us to help keep his music alive," Gunnar says. "Not only is it a true pleasure to play these great songs that people love, but it makes us feel profoundly closer to our best friend -- our father."

Defying preconceptions, Matthew and Gunnar dazzle audiences of all ages. They carry on the family tradition, while carving out their own musical identities.

"Our old fan base was primarily very young females," Matthew says. "We were the guys they had on the posters at home and in their lockers. Now, 10 years later, those girls are grown up. They have children. They have husbands. They have real lives -- and we're still a part of it. They not only bring their husbands and children to our shows, they bring their parents and grandparents! We have the broadest age demographic on the planet."

Much to their satisfaction, the brothers' career path displays parallels to that of their legendary father. He found fame as a teen idol before helping found the country rock movement.

"Yes, it's spooky," Gunnar says. "We had tremendous success at a very young age like he did. And now we're coming to the same musical renaissance that he had at our age. It's discovering what makes you unique, your own inner voice."

Matthew says, "I'm only 32, and I feel more artistically, musically, spiritually and physically vital than I ever have in my life. We're just starting, as far as a musician's life is concerned."

The Nelsons -- music from yesterday, today and tomorrow. 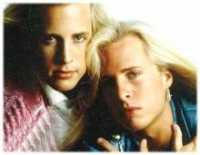