It all started with M.C. Magic a disc jockey who grew up in a low income housing area in Avondale, Arizona. From break dancing to sponsoring teen dances at the Avondale community center, Magic always surrounded himself with music. He eventually made a name for himself by recording personalized songs at the local park and swap.

In 1991, he formed an independent record company called Nastyboy Records. Soon there after releasing his first hit single "Lost in Love." The single did very well considering local radio stations only gave it a few spins in the evenings.

Nastyboy Klick was recognized as one of the top up and coming hip-hop groups out of Phoenix within their first year. M.C. Magic wanted to try something new and different to grab the attention of the radio stations and its listeners. He then contacted the management of the late Roger Troutman of "Zapp and Roger." After contacting Roger Troutman he agreed to assist Nastboy Klick with vocals on "Down for Yours." using the famous Talkbox. Not only did it grab the attention of local radio stations, it reached #10 on the Billboard hot rap single chart (a first for any hip-hop group out of Phoenix). Quickly following the success of "Down for Yours" came "AZ Side", which also brought another hit single. This was the first record to ever receive sampling permission from Madonna. The "AZ Side Remix" was a rendition of Madonna's hit "Everybody."

In 1998, Nastyboy Klick released "Tha Second Coming," which is the sophomore album that was led by the hip-hop ballad "Lost in Love." This time the record reached to #12 on the Billboard music charts. After the release of their second album NBK began touring and performing for many audiences within the next year.

After many trials and tribulations all the members returned to their regular jobs and Magic returned to working at the park and swap. . Eventually, Magic and DOS decided it would be in their best interest to pursue their career as a group, on their own. Magic and DOS asked management to release them from the recording contract with Upstairs Records, to begin working on the next phase of their career.

And now in 2001 known as NB Ridaz卻ame Klick new title?Ziggy joins Magic and DOS on many songs of the new album "INVASION". Once again Mischief gets involved as well as Mischief's cousin Darren. They together they will be known as "M1 and D.DOG". Since the early days of M.C.Magic to NBK and now to NB RIDAZ, their music has been in a category all on its own. Not exactly hip-hop, not exactly pop music or Latin? But a blend of all three, So with "INVASION" comes their own category of music as well? LATINO-HIP-POP 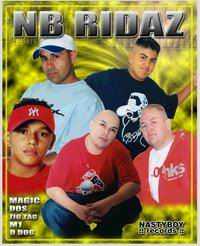