They've created infectious, chart-topping party anthems and unleashed gritty, grimy manifestos. They've toured the world and reigned as international superstars but still live in the city they grew up in. They've dominated the pop and R&B charts, all the while staying true to real hip-hop and themselves.

Naughty By Nature are arguably hip-hop's finest group and unquestionably one of its most beloved. Since the top of the decade, the Jersey based trio has enjoyed three platinum cds, numerous gold and platinum singles, won a Grammy and helped bring hip hop culture to a whole new audience. Yet, despite all the hip hop hooray, you haven't

Featuring the one-two verbal and lyrical punch of Vinnie and Treach and the production wizardry of Kay Gee, 19Naughty9: Nature's Fury is more than just the latest CD from one of the most versatile hip-hop acts around. It's a statement of purpose from a veteran group that is just getting started.

After a nearly four year hiatus Naughty By nature are rejuvenated and ready to show their fans what hip hop is. "This album is eight years down the line from (their 1991 debut) Naughty By Nature but at the same time, it's brand new," declares Treach." It's like we have our chemistry and energy all in line. 19Naughty9: Nature's Fury is like the first record. Ever."

It shows! From the soulful party vibe of "Jamboree" (featuring Zhane), the late night R&B flow of "Blu Balls" (with Kay Gee's proteges' Next), the rugged, dirty south meets Illtown vibe of the first single "Live or Die" (featuring Mystikal and Silk da Shocker), "We Could Do It" which boasts Big Pun, the heart-felt tribute to the fans "Same For

Me," or the underground call to arms "Dirt All By My Lonely" (which has already made serious noise at radio) Naughty By Nature continues to prove that they will not be limited. "This album is across the board," Vinnie offers "from the anthems to the hard core to the meaningful songs to the sad songs." "When we let people hear this album they're like YO!" Kay Gee laughs, "I slept cause I knew ya'll were gonna come with something hot but I never thought it would be like this. Cause we're feeling everything we're saying. We're feeling this project."

If Naughty By Nature are enjoying a new lease on life, they've earned it. Since 1996's Poverty's Paradise, which earned the Grammy for Best Rap Performance Duo or Group, Naughty By Nature have grabbed the reins of their careers and their lives. After some business struggles and industry hassles, Naughty By Nature have emerged stronger, more focused and at a new label with a new intensity. "We've taken our destiny and put it 100% in our hands and in our control," offers Vinnie.

From their years as New Style rocking Jersey talent shows to their platinum smashes like "O.P.P." and "Hip Hop Hooray" from their trend setting style to their groundbreaking appeal, Naughty By Nature have redefined what hip hop can be. In the process they've emerged not just as pioneers, but as true stars. At a time when "artists" are cooked up by a marketing department, Naughty By Nature have earned the respect of the community by working hard, keeping the faith and most importantly coming with dope shit. Everytime.

Ask Naughty about 19Naughty9: Nature's Fury and they cut to the chase. "It's been four years," Treach declares. "A lot of emcees can't come back after that long and still have it to be into the street?but we still in the 'hood. We're there with it and it's coming. This album is the hottest shit Naughty ever put out. Word up." 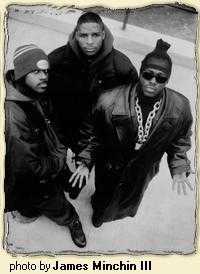