Nana Kitade born May 2, 1987 in Sapporo, Hokkaidō) is a Japanese rock and pop singer-songwriter and musician. She was signed on with Sony Music Japan. She is particularly famous for dressing and designing Gothic Lolita fashion, something that many of her fans have in common with her. Many of her songs were used as anime, TV shows, doramas and movie opening/ending/image themes. In September 2009, it was announced she would become vocalist of her new band Loveless. In 2010, Nana Kitade and her band toured Japan promoting Loveless and signed a record deal with German based label "Spark & Shine". In March 2011, it was announced Nana Kitade and her band Loveless would be touring in Europe.

As a child, Kitade wanted to be a singer and or an anime artist. She started learning the piano at the age of three, and wrote her own lyrics at twelve. In junior high school, she became a fan of Ringo Shiina and learned to play the guitar, traveling frequently to Tokyo for singing lessons

In February 2002 Kitade passed a Sony Music Japan audition and was chosen as the Sapporo area representative and was given the opportunity to debut as a singer.

In March, 2003, the demo which she submitted caught the attention of Susumu Nishikawa, session guitarist and Ringo Shina's sideman at the time of the debut. She signed a deal with SME Records, a subgroup of Sony Music Japan. On August 1, 2005 Nana Kitade participated in the Hong Kong Comic Festival 2005.

After Kitade's debut single, her CD sales began to steadily decline on the Oricon charts. However, her first album 18: Eighteen reached number 15 and charted for five weeks. Following the release of her album she released Nana Kitade: 18Movies, which contained videos of all her singles from her album, and live performances from her first one-man band show, Showcasing her album.

After the release of "Pureness/Nanairo" (Pureness was used as the ending theme for the anime series Beet the Vandel Buster, Kitade's clothing style began to slowly switch to Gothic Lolita. Her new image was fully revealed with the release of the single "Kiss or Kiss", which is her highest ranking single, reaching number 11. During the releases of "Kiss or Kiss" and "Kanashimi no Kizu" (ending theme song for the PlayStation 2 game Fullmetal Alchemist 3: Kami o Tsugu Shoujo her Gothic Lolita clothing was more subtle, but then changed drastically with the release of her eight single, "Slave of Kiss", which contained a cover of the Princess Princess' song "Kiss" and an English version of her fifth single "Kiss or Kiss".

Although by this time Kitade's popularity had dwindled, she developed a small fan base in areas such as The United States, England, France, Germany, China, and Tokyo,[citation needed] gaining the interest of Lolita clothing companies such as Baby, The Stars Shine Bright, of which she has repeatedly stated to be her favorite brand. Other than Baby, The Stars Shine Bright, Kitade is a regular model in the magazines Kera and the Gothic & Lolita Bible. She has become a fashion icon for many teenage girls and is popular among those of Lolita subculture.[citation needed]

Beginning on April 27, 2006, Kitade released 13 singles in a row. These were available exclusively via cell phone downloads, each for 100 yen. Each single was released on the 7th, 17th, or 27th of each month until August 27, 2006. Most of the songs were covers of 1980s hit songs, but a few tracks were new. In July 2006, Kitade released a her first mini cover album Cutie Bunny, containing six of her recent download singles, including "Moonlight Densetsu" (opening theme for the anime series Sailor Moon) and "Lum no Love song" (from the anime series Urusei Yatsura).

She was one of the musical guests at Otakon 2006 in Baltimore, Maryland. Her album 18: Eighteen was also released in the United States through Tofu Records on July 11, 2006 with the bonus track "Kiss or Kiss" (English version).

The end of 2006 brought about Kitade's second album, I Scream, which contained the single "Kibou no Kakera" (Opening theme for the anime series Demashita! Powerpuff Girls Z) and "Slave of Kiss" A-side track "Sweet Frozen Kiss", as well a remake of Greenday's "Basket Case". The album had a more punk-rock feel on it than her previous work and the music for this record was more complex and elaborated than previous one, with a more dark, loud, and lively tune, but due a low promotion and publicity, the album did not sell well, only charting for a week, peaking at number 150 on the Oricon chart.

In 2007, Kitade found herself in the spotlight again, releasing her ninth single "Antoinette Blue" (ending theme for the anime serie D.Gray-Man) which reached number 34 on the Oricon charts. The single lead-up to her first best of album entitled Berry Berry Singles which featured all of her singles including remakes of "Kesenai Tsumi" and "Alice", and a remake of Daisy Chainsaw's "Love Your Money", which were all composed by ex-Megadeth member Marty Friedman. The album was not promoted that much and only peaked at number 95 on the Oricon chart. In France, Kitade has also performed at Japan Expo9, which took place in Paris in 2007. Her best-of album Berry Berry Singles includes footage of her travel and performances there and was later released in Europe on March 5, 2008.

2008 found Kitade releasing the singles "Suicides Love Story" (ending theme for the anime series Persona: Trinity Soul), "Siren" (theme song for the Japanese version of the Canadian series Ruby Gloom), which was composed once again for Megadeth's former member Marty Friedman with a fast, funny, metal-rock-pop sound, and "Punk&Baby's", which all charted lower than number 60 on the Oricon chart. On July 23, 2008 a cover of Cyndi Lauper's 1983 hit "She Bop" was featured on We Love Cyndi - Tribute to Cyndi Lauper album, track 9. In August 2008 Kitade was featured at the 10th anniversary of AnimagiC Convention in Bonn, Germany.

Recently Kitade's song "月華-tsukihana" was featured as the opening theme for the anime series Jigoku Shoujo Mitsuganae by Aniplex which charted at number 27 on the Oricon chart, her highest in two years. Kitade later released her third full length album, Bondage, which debuted at number 85 on the Oricon weekly charts, higher than her previous releases. On May 5, 2009 it was announced on Kitade's official website that she had to cancel an upcoming live due to poor physical health. It was also announced a month later that she would be taking a break from all activities due to poor physical health, and that details would be posted on her site as soon as she recovers

On October 2, 2009 it was announced on Kitade's official website that she would make her return as the vocalist of her new band, Loveless, although the official Loveless website had been open beforehand with a personal message from Kitade. She showcased live as "the eve" of her revival on the same day. Bassist Hiroki, who is known as a tour member of bands, such as Penicillin and guitarist Taizo (ex-Feel), participated in this band. Currently Taizo is the only member other than Kitade not listed as "Live support". Kitade held the revival live, titled the "Birth festival", at Shibuya eggman on October 7. On October 11 a message on Loveless' site announced Kitade's contract with SME Records had come to an end. Loveless also participated in the large Visual kei festival, "V-Rock Festival09" on October 25. She performed and model during a fashion show.

In 2010, Nana Kitade, along with her new band Loveless, performed live shows throughout Tokyo. On October 9, at Shinjuku Marz. Nana Kitade held her first live Visualand Internet broadcast. Unfortunately bad weather prevented the performance from being broadcast live, However the live show was later transmitted via Ustream on October 24. 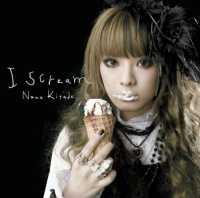