Hitting the street harder than a Big Truck Driver with the pedal on full mash, Jive Records recording artist Mystikal returns from the Crescent City to sink his fangs into the rap world and spit venomous lyrics with his new CD, entitled TARANTULA. Known for being one of the most respected and lyrically adept rap stars on the planet, Mystikal a.k.a. The Man Right Chere keeps you moving in the new millenium with a unique flow and clever delivery that is unforgettable. Please believe he is set to catch you in his web of original flamboyant flava’ that is simply ghetto fabulous!

The Crowned Black Prince of the South, who hails from New Orleans, continues his multi-platinum success of his last project "Let’s Get Ready" with his new highly anticipated fifth CD. The hot new single "Bouncin’ Back ( Bumpin’ Me Against The Wall)", which was produced by the Neptunes, definitely provides the goods to signal the return of "The Ripper" and makes you "… Shake ya ass!" More than a jam, the single speaks of rebounding from adversity in a positive manner, which is something everyone has dealt with given the tragic events of September 11th. "It may not be your time or it might be/ you can’t do nothing about it, its God’s will that’s just how life be".

The James Brown of Rap has the innate quality of making you experience his music by the way he commands the microphone, a rarity in today’s music. When you hear the combination of this God given talent with another tantalizing Neptunes track, it is akin to eating a bowl of spicy seafood gumbo at Sunday brunch while listening to cool jazz on the banks of the Mississippi, heaven indeed! The single is already in heavy rotation with radio stations across the country, and with the phenomenal new video directed by Chris Robinson / Jesse Terrero, "Danger" is the operative word for the competition because Mystikal’s on, fo’ show!

Mystikal began his journey in hip-hop back in 1980 when the New Orleans rap scene was bristling with local, unsigned talent, such as the late New Orleans pioneer Warren Mayes, MC Thick, Gregory D and Mannie Fresh. Mystikal acknowledges these rappers played a major role in helping him develop his style. "Some of my major influences were early New Orleans MC’s like Gregory D. He was one of the first cats to make a record in New Orleans," comments Mystikal. "Mannie Fresh, Sporty T, MC Thick …I grew up either challenging them at Gong Shows or opening up for them."

Never one to be content with past awards or success, the Grammy nominated and Soul Train award winner was inspired to take TARANTULA to a new frontier and give his fans what they have been waiting for, the raw uncut talent that exemplifies exactly who he is. "I’ve paid my dues, and now it’s time for me to shine on a whole new level", Mystikal explains. The album is an amalgamation of tight lyrical word play, showmanship and great production that will undoubtedly satisfy hip-hop heads and newcomers alike. The MC’s and producers who collaborated with Mystikal on making TARANTULA reads like a VIP list in the rap industry.

Production duties were handled by The Neptunes, The Medicine Men (formerly known as Beats By The Pound), Rockwilder, Juvenile, and Scott Storch to name a few. The album is a listeners’ delight from beginning to end and has something for everyone to enjoy and feel. Redman and Method Man bless the mic on the Rockwilder produced "I Get It Started", a bouncy syncopated track sure to get the party hyped. Juvenile puts the hot fire down with rhyming and production credits on "Settle The Score", a poignant song about watching your back and getting the props as well as the paper. Mystikal always gives the ladies their due and "Go Head", produced by The Neptunes, uses the classic pimped out falsetto of Pharrell Williams to fully explain the appreciation and respect Mystikal has for the presence and power of a good woman.

The poisonous title track "Tarantula", produced by Scott Storch, makes you get crunk from the jump and cruise Crenshaw on three-wheel motion. Joined by west coast rider Butch Cassidy providing the hook, the instant G-funk will definitely have you in a neck brace. As Mystikal states in the song, he will "make yo’ moma shake her tail feather". The comically explicit "P***y Crook", produced by KLC (The Medicine Men) is a fast paced head banger in which Mystikal cautions females to come correct or don’t come at all. "Ooh Yeah" is the strip club melody set to make the ladies drop it like its hot over Rockwilder’s sizzling and sensuous track. Another standout is " Big Truck Driver", the new official anthem of sports utility vehicle (S.U.V.) owners throughout the world.

Mystikal urges tree lovers to "get your lighters" because it’s always time to "Smoke One", produced by Odell (The Medicine Men). Vinnie Biggs, Ward Corbett, and DJ Ron close out the stellar cast of producers that makes TARANTULA an instant classic!

Mystikal has consistently soared to new heights with all of his previous platinum projects, and TARANTULA is undeniably his greatest album to date. The CD exhibits his progression and growth as an artist, and expresses his desire to put the rap game on tilt. He possesses a widespread appeal that is evidenced by appearances on "The Chris Rock Show", "Ricky Lake", "Jenny Jones", "106 AND Park" and "Queen Latifah" amongst others. He loves to perform live as demonstrated with past performances on the Billboard and Soul Train Award shows among others. Curiosity into his success has garnered press that spans Newsweek, The Los Angeles Times, The New York Times, Rolling Stone, Vibe, The Source and just about everything in between. So look out for Mystikal and the new CD, TARANTULA because the self- proclaimed Black Elvis Presley is primed and ready to creep and crawl from N’awlins straight to ya. If anyone is looking for the "handsome assassin", Mystikal has a message…. "Here I Go"! 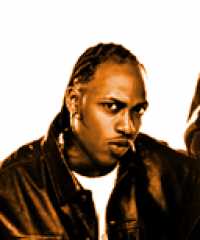