There's a point in a girl's life. That delicate time when she makes the transition from child to woman. When flirting goes from being a giggle fest to an art form. When crushes on boys become love affairs with men. When she moves out from the protective warmth of her parents' home and into the cold clear air of self reliance. When she starts to spread her wings and tentatively, cautiously, but ultimately triumphantly...soar.

On her eagerly awaited sophomore CD, Mya takes those steps, makes those moves, and soars with an album that exceeds all possibilities and fulfills all expectations. Sassy, sexy, soulful and wise, hip hop informed, and R&B flavored, laced with heartfelt singing and state of the art beats, FEAR OF FLYING is about growing up, learning lessons, taking chances, listening to others and minding your heart. Featuring production from Swizz Beatz, Robin Thicke & ProJay, Wyclef Jean and Jerry Duplessis, and songs by She'kspere & Kandi, Soulshock & Karlin and Mya herself, FEAR OF FLYING takes Mya into new uncharted territory and delivers an R&B/pop sound that signals maturity and a new outlook.

Ask Mya about FEAR OF FLYING and she answers, "I've personally grown a lot and I wanted the second album to reflect that. The past few years have given me time to think about what I want to do, the decisions I make in life and where I want to be. I'm becoming more and more of my own person and making those choices for myself, on my own."

The lush title track (produced by Knobody) gave Mya a creative launching off point, because as she notes, "it uses the idea of being afraid to fly as a metaphor for other issues. I think that one of the scariest things isn't failure but success. When you succeed or attempt to become successful, you often have people trying to hold you back, second guessing you, or sometimes trying to manipulate you into believing that things, especially careers, aren't guaranteed. Well, I've learned nothing is guaranteed and I feel the theme of the album displays that there will always be turbulent times - good, bad, up, down. Despite our fears or insecurities, we must make a leap on faith alone. I once read that 10% of life includes our experiences, 90% is how we deal with them, and with that I come to the conclusion that if your heart constantly tells you something, then you should go ahead and trust those feelings."

That spirit and determination is evident on the lead off single "The Best Of Me". Co-written by Mya, produced by the sizzling hot Swizz Beatz (DMX, Ruff Ryders) and featuring The Lox's Jadakiss, "The Best Of Me" is edgy and street savvy but underneath the syncopated beats is a message Mya wants to get out. "It's about setting standards for yourself, about following them through and not allowing the temptations of a heat of the moment situation to lure you into something that you may regret later in life."

Another single is "Takin' Me Over" which was co-written by Mya and produced by Robin Thicke and ProJay. A catchy slice of retro soul, "Takin' Me Over" boasts a cameo from Left Eye and shows Mya in a playful coy mood. Mya dubs it her "don't give a damn song." "It's all about a woman who says, 'listen, I don't care if you're looking at me crazy. I'm feeling this so I'm gonna do it.'"

Another hot track comes courtesy of She'kspere and Kandi ('No Scrubs', 'Bills, Bills, Bills') who brought "How You Gonna Tell Me" to the album. "I added my thoughts lyrically and conceptually," Mya, who co-wrote the song, says. "I wanted the song to be about people preaching to me what they don't practice. About how these specific people speak to me on the way I should live and my reaction to them and their twisted lives," Mya laughs. "So there you go!"

On a romantic empowerment note is the sexy ballad "No Tears On My Pillow", which was written by Mya and the song's producer Robin Thicke. While more up tempo, but no less sexy is "Pussycats", co-written by Mya and produced by Wyclef Jean and Jerry Duplessis. As one might ascertain from the title, "Pussycats" is a frisky jam, most definitely a departure from Mya's little girl image. "It's nice to work against type, to take a little of a left turn from what people might expect of you. I felt really good working with Clef because he gave me creative space. This time around I knew what I wanted to say, how I wanted to say it, and I feel now I have more to contribute in a variety of ways."

Mya has earned the respect of her peers with hard work in and out of the studio. Along with her solo efforts and collaborations, Mya has emerged as a powerful and popular concert act, bringing her unique vocals and dancing skills (Mya trained as a dancer for years) to stages across the U.S. Following the release of her 1998 platinum-plus self-titled debut, Mya hit the road, logging miles on 98's leg of the Smokin' Grooves Tour, as well as concerts throughout the U.S. In 1999, Mya was a featured main stage act on the Lilith Fair Tour and even though Mya had honed her stage act, being part of Lilith was daunting. "I was really nervous," Mya admits. "But, the feedback from the audiences was really good and I met a lot of great artists from all different genres of music. The whole experience was very embracing."

Audiences have been embracing Mya since her debut. At the tender age of 18 the Maryland native burst on the scene with an infectious collection that delighted fans and critics alike. Mya spawned three Top 10 singles, "It's All About Me" (a duet with Sisqo, which also earned a Soul Train nomination), "Movin' On" (featuring Silkk the Shocker) and "My First Night With You." Along with those singles Mya kept the spotlight focused on her with "Ghetto Supastar," from the Bulworth soundtrack. The single, which also featured Pras and ODB went Top 10 worldwide as did her giddy collaboration with Blackstreet "Take Me There," from the Rugrats soundtrack.

Along with making music that appeals to the streets and the suburbs, Mya has served as a print spokeswoman for Bongo jeans and has a Tommy Hilfiger lipstick shade named after her. In addition, Mya speaks regularly about teen issues, in particular self esteem for young women. In that capacity Mya serves on the advisory board of the Secret to Self Esteem program (an alliance between the Partnership of Women's Health and Secret antiperspirant), which is dedicated to helping girls become strong women. In an industry which tends to chew up and spit out young female artists, Mya, with the support of her family and management team, is determined to maintain a positive healthy image for her fans and stay true to herself and her beliefs. "I've realized that I can be in this business, be successful, work with who I want to, and present a sassy image but not have to sell my soul," Mya says. "I'm very aware of my fans and people in general and I understand what they are going through, because I went through and continue to experience a lot of the ups and downs myself."

At the end of the day, despite the fame and the tours and the awards, Mya remains a grounded, focused young woman, albeit one who reigns as a superstar. With an eye to start working more on production, as well as continuing to write songs, Mya is taking each day as a new adventure, growing as both an artist and a woman. Ask her what FEAR OF FLYING represents to her and she answers quietly, "control, I feel like I have a new way of expressing myself and that I have a way of saying what I feel in my heart."

On FEAR OF FLYING Mya spreads her wings, aims for the clouds and glides. 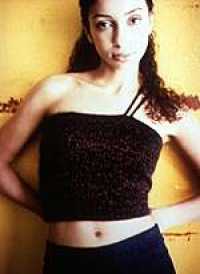