Mustasch was formed in 1998 as a band in which they would allow themselves to, musically, do whatever comes to mind. Where a riff is always worth a go without prejudice. Is it good, well let's use it. Maybe even without anything more to it. It had been a vision for a long time, but since Ralf was engaged in B-thong, it took a while to get started.

Mustasch have made two demo-recordings. One in august 1998 and the other one in august 1999. Both with a mobile studio at the Mustasch Farm. A small farm located on the island Orust just north of Gothenburg, Sweden, where Hannes and Mats also lives. A great way for the band to capture the music on tape. They can proceed in their own pace and combine the recording sessions with boating in the archipelago.\nThe first demo got some really good attention in both press and radio, and several of the songs turned up on various compilations around the world. The second one landed Mustasch a contract with Majesty/EMI. The debut, The True Sound Of The New West, was released in january 2001. The rest is yet to come... 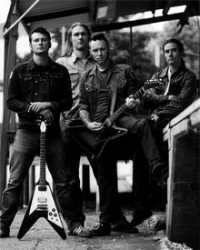