Moto Boy, whose real name is Oskar Humlebo, is a guy who performs with only his black heavy-metal guitar and fantastic voice, dressed in high heels and make-up.
Moto Boy’s first single, Blue Motorbike, became official May 21st 2007, and his first CD was released in January 2008 by the record company Songs I Wish I Had Written.
In 2007 Moto Boy performed as warm-up band for The Ark at a number of concerts. This was a great start for the new CD that was planned to be released in October 2007, but got delayed as Oskar jumped in as a guitarist instead of Jepson, who then was on paternity leave.
Oskar was born on 2 August 1980 in a small village in mideast Sweden called Färila, and he grew up in neighbouring cities Bollnäs and mostly Hudiksvall. On a holiday in England his father took him to a cathedral and when he heard the choir he loved it. When he came home to Sweden he started to sing! 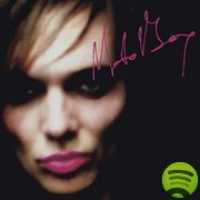