Mordred started their own carrer back in 1989; at that time they were part of the San Francisco's bay area, in which there were many bands developing the Thrash Metal music style with acts like Metallica, Testament, Megadeth, Suicidal Tendencies and Vio-lence.

In the same year they came out with their first album "Fool's Game", a thrashy-oriented release apart from two songs: "Everyday's holyday" and the cover of "Super Freak" by Rick James, that showed us all their unique interpretation of Thrash Metal mixed together with turn-tables and funky bass line elements.

In the year 1991 before the release of their next album, Jim Taffer was replaced by James Sanguinetti; then "In This Life" was released, and it represented the very distinctive style that Mordred tried to reach from the beginning, combining thrash influences with the rap-style turntables of Aaron Vaughn and the funky bass-lines of Art Liboon.

The next effort was titled "Vision" (1992), a mini-cd made up of six songs, keeping the original mixture of metal and funk-rap style but more funk-oriented than ever, while unfortunately internal friction within the band developed, leading to the departure of longtime vocalist Scott Holderby.

He was replaced by new vocalist Paul Kimball, and in 1994 it was the time for "The Next Room" but the feeling wasn't the same anymore and after releasing "In Their Live" in 1995 the band splitted up.

Most of the former members of the band reunited in the spring of 2001 to play some shows and start a new carrer; moreover the band announced that they would be changing their name and drastically changing their style......we'll wait for you guys!!! 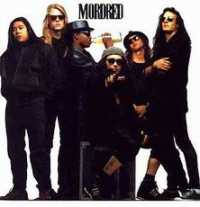