In a world choked with sound, for the last few years it’s been hard to find anything that lingers, anything that grows with you rather than on you, any relationship between audience and artist with that special fidelity that goes beyond infatuation and becomes love. Morcheeba are that rare thing: a band to love but also a band that keeps you guessing, that refuse flatly to co-operate with the safe maxims of stasis and repetition that make so much modern pop so damn predictable. Here is a band with a totally unique relationship with anyone who hears them: perhaps the only band on earth to demand that you expect the unexpected and then actually deliver on that promise.

It’s a willful genius that beamed in from nowhere, or suburban Kent as it was known back in the winter of 95 when a beguilingly unannounced twelve-inch called "Trigger Hippie" dropped into the world’s lap and slipped under the skin. Everyone who heard it has never forgotten it, it’s mix of broken beats and busted blues immediately surpassing any trip-hop comparisons the lazy could sling at it, hinting at an emotional depth and musical reach far beyond the vagaries of any passing scene. It came from a trio called Morcheeba made up of two brothers, Paul and Ross Godfrey, and a singer, Skye, who could draw tears with her throat.

When the album that followed emerged soon after there could be no more doubt: 96’s "Who can you trust" still ranks as one of the finest suites of misery a British band had ever given us. The sublime mix of Paul’s hypnotically heavy beatscapes, Ross’ fluidly searing guitar work and Skye’s perfectly responsive voice all sounding like they’d been waiting all their lives to find each other and only had an hour to speak the truth. An album borne out of frustrating small-town lives for the two brothers, in which only their mutual obsession with hip-hop and blues afforded exorcism.

On moving to London and hooking up with a similarly loose-ended Skye at a house-party, the trio submerged themselves in sound for three months to produce what they then thought could be their only chance of ever being heard. That the album, and the increasingly successful singles it spawned ("Tape Loop", "Never An Easy Way") found such a huge response amongst the public was testament to the word-of-mouth, almost secret love Morcheeba were already cultivating in anyone with ears to listen. It also took the band around the world, making friends with heroes (David Byrne personally asked the boys to work on his solo album) and tearing up America with a level of acclaim their contemporaries and enemies in Britpop couldn’t get near.

With 98’s "Big Calm" Morcheeba did something bands aren’t meant to do anymore. They changed. Progressed. Moved on, blew up the template, maintained the essentially melancholic tint but expanded their debut’s blue-n-black confinement into a full-blooded riot of pop colour and warped craft. Trawling wider through the trio’s musical obsessions, diving into dub, folk, soul, hip-hop, and psychedelia but always suffused with their own uniquely intuitive songwriting skill, it was declared album of the year by those supposedly in the know, and has racked up a million sales since amongst those who know even better.

The triumphant gigs and festival appearances that followed (including an unforgettable Albert Hall show) cemented their rep as one of the finest UK live bands, but the exhaustive world tour that followed broke backs and spirits. When the band returned to England in early 99 it was clear the Morcheeba story had to take another tangent. Ross: "The initial excitement of getting somewhere had kept us on this mad ride for about four years and when you wake up from that you realize you’ve got a real bad hangover and you haven’t been paid."

Something Paul affirms: "We just had to chill out, take a break from each other, really each individually come to terms with who we now were and what we wanted to do. Our lives had changed, we had changed, but the way we worked hadn’t. So we relaxed. I got back to DJing, Ross got a flat and started leading a normal life, we all just really needed to step off the rollercoaster, and then when it came to recording another LP we all totally got our enthusiasm back for it."

It’s a new lease of life that’s given us perhaps Morcheeba’s most startling album yet. Fragments Of Freedom isn’t just a brazenly triumphant pop album, it marks a culmination of the band’s full vision of sound and words and the shapes they can throw. Recorded over the space of a year in their own studios in sunny Clapham, it’s an album guaranteed to get Morcheeba’s already huge fanbase gasping at the sheer nerve and pop nous on show. For the unconverted, it’s now just a matter of time.

As Ross explains, it’s the natural product of a change in all their lives: "We’ve just stopped getting so obsessed with music: it was a perfectionism that was getting in the way of expressing ourselves. You can just get burnt out being a music obsessive- you start morbidly fixating on certain things: on this album we really wanted to make all the music we love in it’s entirety. And that meant being honest- I listened to Michael Jackson’s ‘Off The Wall’ and nothing but for about a month. Not cos it was ‘cool’, or I could use it, but just cos I loved it. That’s the kind of music we wanted to make, the kinda stuff we were into before Morcheeba started- disco, pop, old-skool rap, funk. And because we took a lot longer than normal making the album, we were able to go anywhere we wanted and be totally natural and relaxed about it. It was the most unconscious thing we’ve ever done."

Paul concurs: "We were just sick of the misery, the slow downtempo songs lose it when you’ve played them for three years. We’ve always pretty much written pop songs, but we’ve never written something uplifting, basically because we’ve seen life as mostly bullshit illusion occasionally tempered by peak experiences. But we realized that all the drunken induced self-pity isn’t honest to us. We’ve always loved music that just makes you enjoy yourself. And that’s what this album’s all about." 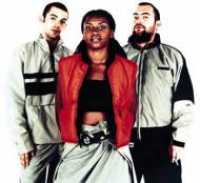